Fact of the Day: Borat Irony 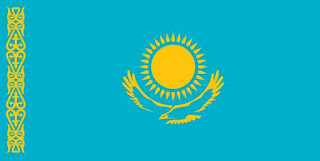 In 2006 Sacha Baron Cohen starred in Borat, playing the lead character Borat Sagdiyev. The fictional character is from the country Kazakhstan, but his antics in the movie did not please the government of Kazakhstan and the surrounding regions who discouraged cinemas from showing the film. In 2012 the government of Kazakhstan thanked Cohen for Borat, as they realized that their tourism industry had increased tenfold since then.
Posted by Adam at 12:00 AM

I really don't think "Borat" has really much influence to the economy of Kazakhstan. The country is rich in minerals, gas and OIL!!!
Unfortunately has not the best record in human rights, but sure would be an interesting tourist destination. Kazakhstan has a very rich historical history, plus rather picturesque landscapes. They are also very sports oriented - ice hockey, being one, so Canadian teams would be likely to "poach" for their league.
B J Hunnicut aka Colin

I tried to watch Borat but I dind't like it so much, I'm always prudent when it comes to "playing" with foreign characters, thus cultures... for example, I dislike how Italians are usually portraited in the US and elsewhere. However it's true about Kazakhstan's economic boom, indeed there's an Italian guy, a singer, who's reached fame and fortune there, while he was a complete stranger in Italy.
He comes from my region and his art name is Son Pascal. Cool thing, right? Weird things happen in life...
Have a nice day!

I still wouldn't want Borat to advertise my, or any, country. What a vile, disrespectful creature he is

Glad to see Kazakhstan recognized that the Borat helped their tourism. Funny how things work out.

All comes back to the money.

Aha, that is interesting!

We have missionaries that our church supports in Kazakhstan and we pray for the country daily.

interesting ,all is well when it comes to financial fact thank for sharing

People are so easily offended, but when the money starts pouring in, you're the man.

Dezmond.
For once - well I have agreed with you before - the last person I'd want advertising Australia is that clown, Borat.
I am a bit suspect on the "Kazak's thanking Borat for tourism promotion". Maybe a minor official from the Ministry of Tourism released a short press comment, that was somewhat over enlarged by the overseas Media? That sounds more plausible to me.
Colin

I guess it worked out for them!