Fact of the Day: Carter Rabbit 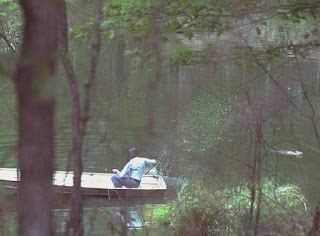 During 1979 President Jimmy Carter went on a solo fishing trip in his home-state of Georgia. An enraged swamp rabbit swam towards his boat where Carter managed to deter it away. While Carter had been concerned while he was on the boat, the event became a laughing stock with many jokes and parodies to emerge later.
Posted by Adam at 12:00 AM

I've never heard about this. Sounds rather humorous.

An angry swamp rabbit!? Where on earth are these horrid creatures!?
Georgia of course. That's more creepy than funny to me!

Poor old Peanut Farmer Jimmy. Even the swamp rabbits were against him.
I hope Georgia keeps these strange creatures well and truly within the boundary lines of the state.
Strange on many trips to Georgia, I never heard of this animal species. Maybe my friends thought I'd think they were "crackers"???
B J Hunnicut aka Colin

What exactly is an enraged swamp rabbit? Lol

I do remember this incident, but I don't recall Carter being alone. It was thought the rabbit might be rabid and I never thought it funny.

lol could have had rabies, beats an alligator.

Enraged swamp rabbit? What haha? Probably that rabbit didn't like him as a President!

I remember that! That, and the whole "lusting in my heart" thing. Oh, for those innocent days.

Today it would have produced a lot of memes!

not too funny if the rabbit did indeed, have rabies.