Fact of the Day: Cornwallis Irony 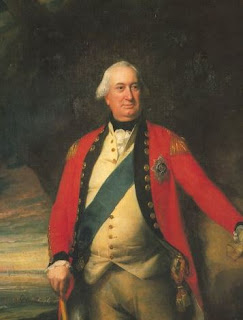 The Stamp Act of 1765 was one of the causes of the American Revolutionary War. Not many in British Parliament voted against it. Charles Cornwallis who had a seat in the House of Lords voted against it feeling sympathy for the colonists. He ironically would become the most famous British general during the American Revolutionary War.
Posted by Adam at 12:00 AM

Lord Cornwallis - very pompous fellow but he must have learnt something after being defeated by the US colonists at Yorktown, as he improved in posts after that in India and Ireland.
Maybe the Mel Gibson movie, "The Patriot", portrayal of his leadership, as he was a sticker for the rules of warfare at that time, is subject to conjecture???
B J Hunnicut aka Colin

Interesting. I didn't know that.

That is pretty interesting!

Sympathy is one thing but he did his duty when ordered to.

Never would have thought he was very sympathetic

I didn't know this. Interesting that the artist who created the portrait you've included did nothing to minimize his portliness.

I'm so bad on history, I had to look up what the stamp act was. Interesting about Cornwallis.