Fact of the Day: Father Cruz 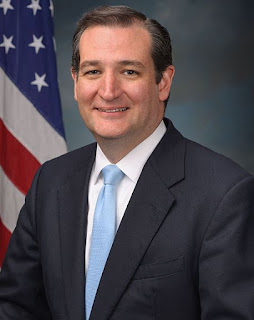 2016 Presidential candidate Ted Cruz's father Rafael Cruz was born in Cuba. At the age of 14, he joined the Cuban Revolution eventually suffering abuse from the regime of Fulgencio Batista. He eventually fled to the United States before Fidel Castro took power. While he had joined Castro's cause, he apparently said he had no idea that Castro was a communist and became a critic of his regime in the years to follow.
Posted by Adam at 12:00 AM

Well it must run in the family - the present one doesn't seem to know whether he is "Arthur or Martha", and the Republicans in Washington can't stand him.
I see Mitt Romney has fired a few well directed "salvos" at the lunatic, Trump.
Taxes, failed companies, workers pays etc etc - oh what a tangled web was unleashed.
Got big coverage on the news here in Australia. Things are really warming up on the Republican campaign trail.

One cartoonist in one of our right wing ( now don't have a fit Adam, Murdoch papers) had a cartoon of Hillary and Donald standing at lecterns delivering their final speeches to the masses in front of Abe Lincoln on his chair at that memorial on Capitol Hill. Old Abe was getting out of his chair saying - "I can't stand anymore of this rubbish".
I think with this "all brawling, no policies" circus that was an appropriate cartoon, eh?
B J Hunnicut aka Colin

What an interesting biography!

I heard Cruz ask the others in the race to "prayerfully" consider dropping out.
"Prayerfully?" Does he WANT to alienate people? Not that there's anything wrong with with religion (unless you think your god wants you to cut peoples heads off). But..."prayerfully?"
My head hurts with these people.

Oh God please, not that I like Trump, but if my only choice is Cruz, God please give me the clown (Trump), at least I get a good laugh everyday!

Amazing background. And what's more amazing? All the hubbub about Trump. I don't think the U.S. has had these kinds of emotions in a long time. Someone needed to stir the pot. Now, whether he deserves to be president......??

I'm heard there's a bunch of people threatening to move to Canada since all this Republican in fighting. Little do they know it's not that easy to immigrate to Canada.

Please Kirsty - surely you mean NEITHER???
You'd get one laugh with Trump and then "BOOM".
The "Proletariat" will have triumphed.
Not the Soviet style, just the idiot style.
You won't have to worry about the wall building,
the World will do it for the USA!
It is scary.
If you MUST have a Republican then please let it, unfortunately, be young Rubio and that is scary enough.
Colin

Strange how Obama's mother being a native born American citizen wasn't good enough for Conservatives but it's okay that Cruz was born in Canada. It can't be due to a little thing called racism, could it?

Kristy, I agree....can't take Cruz and altho I started off liking Rubio just a tiny bit, I no longer do...Trump IS going to be the nominee and I go down on my knees every night, praying he can whip Clinton. ANYone is going to be so much better than Clinton, and Donald just may do it.

(and I know I am going to get slammed here for being a Republican and about half-way liking Mr. Trump....bring it on) woo hoo...ain't life grand