Fact of the Day: The Great Scott Flood 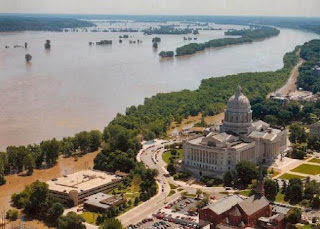 In 1993, a man named James Scott had caused a massive flood on the Mississippi River in Missouri by damaging an important levee. He denied any wrong-doing, claiming it had all been a mistake. A friend of Scott's eventually told police that he caused the damage to strand his wife on the other side of the river so he could be free to party, to fish, and to be unfaithful to his wife.
Posted by Adam at 12:00 AM

Email ThisBlogThis!Share to TwitterShare to FacebookShare to Pinterest
Labels: fact of the day, Mississippi, Missouri

He'll definitely be crying a river...

And the end result, please tell?
Rather excessive, expensive and the list would be almost endless for the farmers, etc - not to mention the local councils and State governments for HIS "romp in a haystack"!!!!
Colin

What will we hear next?

That is taking things to a rather high extreme

I was about the say the same thing that Pat said.

It's hard to imagine how a man could damage a levee. He must have really been irritated by his wife.

Not one mention of the damage to the rural sector!
Makes me wonder on what planet some people live and whether they think food grows on supermarket shelves.
Wake up for God's sake.
Colin