Fact of the Day: House of Saxe-Coburg and Gotha 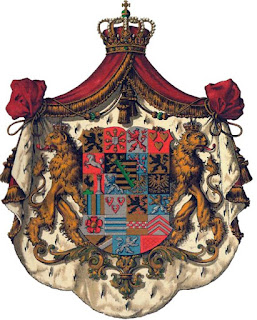 Albert, The Consort of Queen Victoria was probably the most influential of them all but there sure were plenty of them, for better or worse.
It is a good read on Wikipedia just to see where many of them ended up etc.
Colin

Adam, I do love how varied your posts are:) Thanks for sharing all these facts that otherwise I would not have known about:D

During World War 1, the British royal family changed its "surname" from Saxe-Coburg-Gotha to Windsor because of anti-German sentiment.

So a house where one king fits all

Another interesting post!!
Thanks for the advice about painting the cabinets. : )

I don't think even the Bulgarians remember when was the last time they had a Tzar :)

Coming here is like a history lesson. But far more interesting than in school :)

The name was so Germanic that the British royal family changed it in WWI to the House of Windsor.

Thanks for all these facts, Adam...

Actually Stephen it is a complicated business with names of this Royal family.
When Albert of Saxe-Coburg und Gotha married Victoria, Victoria was from the House of Hanover. She took his surname heritage (house line).
At some stage prior to WW1, the House of Battenburg came into play - that was the Germanic name that was changed to Windsor.
Along comes Phillip of "The House of Schlieswig-Holstein-Sonderburg-Glucksburg" - a mouthful and also he was related to the "House of Hesse", so I suppose that could also be added???. Phillip had changed his name to Mountbatten ( still a bit Germanic), taking this name from his Uncle Lord Louis of Mountbatten.
Now as Viceroy of India after WW2, Lord Louis presided most admirably over the Independence of India, much to the horror of one, Winston Churchill.
Elizabeth's father died after she married Phillip who then wanted the House of Windsor changed to the House of Mountbatten.
BUT!!!! Old Queen Mary, the sovereign's consort, during WW2 and was a German and spoke German better than English, had a bloody fit. Windsor it was to remain and Churchill still freaking out of the loss of the Empire (India or technically the Sub-Continent) agreed.
That lead to the "famous" saying of Prince Phillip - "I am the only father in the World, whose children don't bear my name".
Which begs the question - why was the change of the German names from Hanover to Saxe-Coburg und Gotha permitted for Victoria and Albert, but the marriage of Elizabeth and Phillip, this was not allowed????
I think the lesser members of the House of Windsor and have the double barreled name of "Windsor-Mountbatten".
Quite a jigsaw puzzle really.
B J Hunnicut aka Colin

Sorry Old Queen Mary was WW1 - I have put 2, but she was still alive during WW2. She lived to see one son, abdicate (uncrowned), one son to be crowned King and also her grand daughter, Elizabeth to become Queen. Obviously Mary had good genes for longevity!!
Colin