Fact of the Day: Huey Long 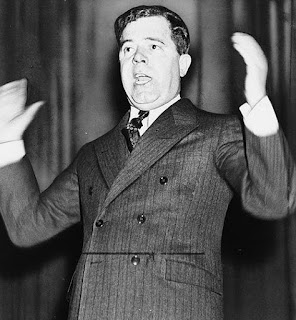 Huey Long was a Senator and Governor for the state of Louisiana in the early 20th century. An outspoken populist he proposed a plan called "Share Our Wealth". It was essentially a tax that would cap the income of the wealthiest Americans and give it to the poorest ones. He planned to run for president in 1936 but was assassinated by Dr. Carl Weiss shortly after announcing his intent to run for president.
Posted by Adam at 12:00 AM

Email ThisBlogThis!Share to TwitterShare to FacebookShare to Pinterest
Labels: democrat, fact of the day, Louisiana

We have an expression in Australia. "Send it down Huey".
Refers to storm clouds in times of drought - rain is needed.
We also are known for our famous "rain dances" and really get into the swing of things when HUEY SENDS IT DOWN - ha ha.
I wonder did the expression come the "ideas" of Huey Long?

Another strange coincidence - I have just finished watching the excellent mini-series - "The Holocaust" and the Jewish family that the story follows was the family of a Dr. Karl Weiss who was gassed right at the end of the war at Auschwitz. This DVD should be an educational lesson for all to see. It is excellent.
Adam, are you using mental telepathy with me???

This "Huey Long" and his ideas should stir up a hornets nest with ????
B J Hunnicut aka Colin

I've never heard of him. Interesting

The rich sure would be against that in any century

What a terrible idea...he must have been having money flow problems...

"The Kingfish" was certainly a colorful character, but he was too volatile to make a decent president.

The things you learn from the most unlikely of places??
I had no idea that the song which exemplifies a strong meaning in the words from "The Great Gatsby" - "Ain't We Got Fun" was a US State song???
Colin

I recall reading that long was critical of FDR's policies because they didn't go far enough to help the American people.