Fact of the Day: Meryl Kong 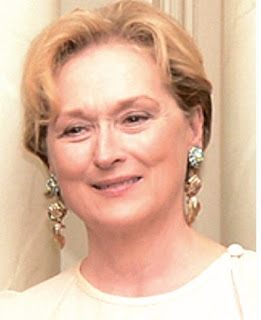 One of Meryl Streep earliest film roles could have been in the 1976 version of King Kong, however the producer Dino De Laurentiis did not like her. He told his son in Italian that she was ugly, and to his surprise she understood what he said and she basically told him the honest truth about his "opinion". Streep has been nominated for an Oscar 19 times, with 3 wins.
Posted by Adam at 12:00 AM

Email ThisBlogThis!Share to TwitterShare to FacebookShare to Pinterest
Labels: fact of the day, king kong

I watched The Devil Wears Prada only with her. She played there very good!

Meryl is one of the best known "exports" of the USA to the World of the film industry and a lot of other causes also.
Her best roles have been playing actual people, all nominated for Academy awards.
"Julie and Julia", "Out of Africa" and "The Iron Lady", all DVDs I have and cherish.
Actually I have the just been given (today) as a real surprise gift, the Mini-Series which won 8 Emmy Awards and 2 Golden Globe Awards - a 6 part episodes of 90 minutes each - "The Holocaust". Excellent viewing and EDUCATIONAL!
Quite a coincidence that Adam puts up Meryl and I get this unexpected gift !!!!! ????
B J Hunnicut aka Colin

Yes, I remember her saying this on David Letterman. Proves how one should never listen to the ''opinions'' of others!

Oh my goodness, guess he was looking for a dumb blonde!

That's his loss. She is a great actress.

Ha ha, good for her!

She's the one laughing now

No loss for her. Dino's King Kong was dreadful anyway.

Even if I was suffering severe hallucinations,
no way could I envisage Meryl lowering herself to
something like bloody part in a " King Kong" movie.
Anyhow if Trump or bloody "pray-mat" and "bible waving" Cruz wins the Republican nomination, the World will get a real life version of "King Kong
and his Buttons".
Colin

She is the best actress of our time...never a beauty but I still think she is adorable.
So amazing how politics can find it's way into a conversation about an actor.

Oh you have forgotten!
Ronald and Nancy Reagan, etc etc etc.- how many of the present Hollywood crop don't feature at the rallies to support the candidates?? Hmmmmmmmmmmmm?
You are wasting your time with me Mme. as you TRY to be smart.
Colin

Bravo to her! glad she was able to put that buffoon in his place!

I remember that and I remember what she told him. She is so much better than the overrated Jessica Lange