Fact of the Day: Namibia 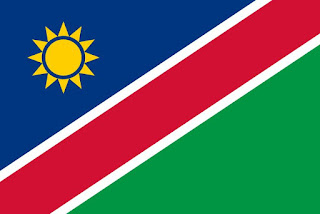 In the 19th century, Chancellor Otto Von Bismarck led Germany to conquer the African country of Naimbi. It remained a German colony named German South-West Africa until the end of World War I when it was given to South Africa. Naimbi also suffered from the racist laws and polices of South Africa's Apartheid. It gained independence in 1990 after the 23 year long Namibian War of Independence .
Posted by Adam at 12:00 AM

Email ThisBlogThis!Share to TwitterShare to FacebookShare to Pinterest
Labels: fact of the day, germany, south africa

There's so much of this history I didn't know. Thank you for informing all of us.

All European powers during that period were competing for colonies for "raw" materials for commerce and industry.
The German Government of the time of Otto von Bismarck
also colonised the northern half of Papua New Guinea.
Thus the still German names of towns and seas, eg: The Bismarck Sea, Finschhafen, Alexishafen, Heldsbach etc.
Cheers
Colin

23 year war? That's crazy. And to think we don't learn of such a thing in our history classes.

Those racist laws and policies...just horrible.

yep, it was either Germans or Dutch people down there and Belgians up northern

And the British, the Portuguese and up north the Spaniards, the French and the Italians.
Colin

They sure had to fight. 23 years is one long war and nobody talks about that.

Another country gobbled up by European aggression.

I slept through History class. Thanks for your interesting information. Your post are always short and informational. I like that.
Lisa