Fact of the Day: Queen Jane 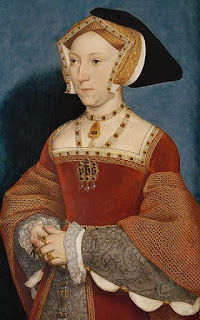 King Henry VIII was infamous for his many marriages which often went sour. His clear favorite was Jane Seymour, his third wife. She died shortly after giving birth to Henry's only legitimate son (to survive infancy), who became King Edward VI. She was the only queen-consort to be buried right next to Henry VIII.
Posted by Adam at 12:00 AM

All the different kings and queens gets so confusing to me.

Too bad she died so quickly!

Guess 3rd time was the charm for him to find his favorite.

She was his favourite only because she actually bore him a son, which is what he wanted from all those marriages. It secured the Tudor dynasty although the kid didn't reign long and died young.

He wanted that heir!

I can't imagine anyone wanting to be Henry's wife. Sheesh!