Fact of the Day: Young Hero 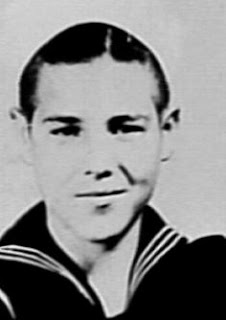 After the Pearl Harbor attacks, Calvin Graham enlisted in the U.S. Navy and had him serving during World War II. He earned the Bronze Star, the Purple Heart, and a few other awards. However he lost these awards when it came to light that he was only 12 when he joined and 15 by the end of the war. After writing to Congress, he got most of them back. He had all his honors restored in 1994, which was two years after he had died.
Posted by Adam at 12:00 AM

Email ThisBlogThis!Share to TwitterShare to FacebookShare to Pinterest
Labels: fact of the day, world war 2

That's cool, thanks for sharing!

12???? Good grief! That's incredible. What a shame he wasn't alive when the awards were restored.

Brave young man..but what a pity he was given back his awards after he passed on - often happens.

12? Damn, brave indeed. Should have been able to keep them.

Wow, he was so young!

I think they made a TV movie about this, starring a young Ricky Snyder.

That's really sad all around.

A sad fact all the way around...bless his heart, I'm glad he got part of them restored before dying....