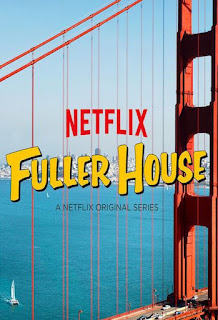 Full House started shortly before I was born, but I remember the show and I was old enough for it to have been part of my childhood. My wife Daisy was also a fan of the show when she was a little girl back when she lived in Minnesota. We were pretty excited about the sequel series Fuller House, which I admit did make me very nostalgic the more I heard about it. But does it do the original series justice? 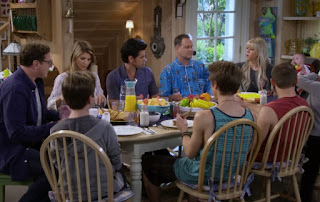 Fuller House begins as Danny Tanner is set to leave for Los Angeles. Most of the family is there for the goodbyes, and DJ is left by herself. She's recently widowed, and has three boys of her own. It doesn't take long for everyone to realize that DJ needs help as she can't manage her life especially with young children. She's going to need help from friends and family just like her father did after the death of her mother. 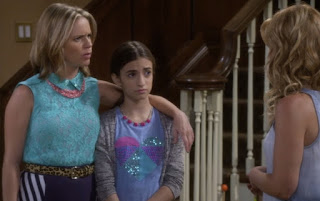 Her sister Stephanie and best friend Kimmy Gibbler step up to help DJ out. Stephanie put her career on hold for her family, while Kimmy is almost finished with a divorce. She agrees to move in, and brings her daughter Ramona with her. Ramona is no stranger to DJ or her children, though DJ's eldest son Max does hate her a little bit. This might get worse when he realizes that he has to give up his room so she can have it. 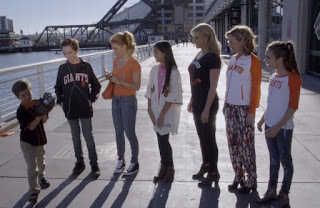 Shortly before we started Fuller House, I heard critics trash the new series with very harsh opinions. I can say that their views on it don't mean squat to me. If you weren't a fan of the original though, there's not much for you here. However if you were, you'll fall in love with this one. I was really surprised by how much we liked it, and my wife got upset when we finished the whole thing. I really liked DJ, Stephanie, and Kimmy taking the roles of the co-parents, and the new kids are likable too. I thought Max was pretty funny (he reminds me of one of my nephews), and Ramona was a lot better than I expected. It's been over twenty years since the original ended, and I'm really glad the Tanner family is back.

I still haven't gotten around to checking this out. But we did finish House of Cards!

I need to see this!!! I grew up watching the Olsen twins, and not just from this show. Too bad they didn't join in the fun.

I liked Full House. I haven't seen the new series though.

I've never seen this on Ukrainian TV, but I've the name of this show somewhere...

Not a program I'd watch, and I'm surprised to rated it so high when I've heard such dreadful things about it.

I remember my girls love full house and was fascinated when they went to San Francisco!

I will watch this TV Series. Thank you for the review!

I'm on episode two. Didn't like the first one, but the second one was better. It is generally a lovely, warm sitcom that we need today, and those who trash it can go an watch their cynical MODERN FAMILIES and other crap. Today's world needs more warm family shows

We have a few other shows we are working on right now, but this one is definitely next on the list. I can't wait to reacquaint myself with the Tanner family!