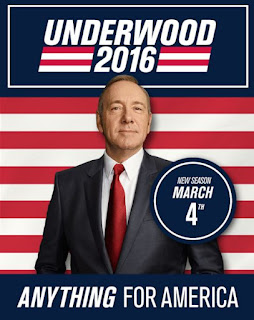 House of Cards was one of the first Netflix Original Series, and it's stayed good enough to remain relevant. But I will admit that the third season was disappointing compared to the previous two. Frank Underwood's revenge on President Walker is over, but now he has to remain being President himself. To make matters worse, Claire walked out on Frank at the very end of the third season. Can he recover from it? 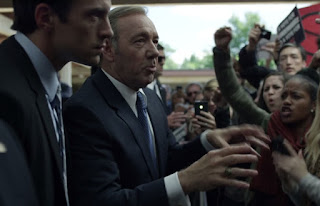 The story begins shortly after the events of the third season. Frank tries to repair his marriage with Claire as a divorce from the First Lady is not good for politics and keeping the public from knowing anything about it will be tough. He's also facing a lot of opposition from both Democrats and Republicans. His relationship with Russia is causing a strain on everyone who needs to put gasoline in their vehicles. With this kind of unpopularity, he might not be president by the year 2017. 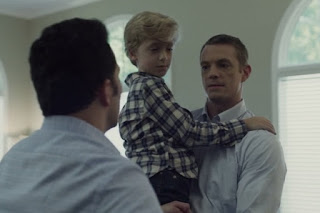 Even if Frank defeats Heather Dunbar for the nomination, he'll have to face Republican William Conway in the general election. He's a young and popular Governor of New York whose family-oriented life is much different than the childless Underwoods. Frank will still have to worry about making peace with Russia, and a new threat. A Middle Eastern group called ICO is causing havoc to the region, and plans to bring similar events elsewhere in the world. It's up to Frank to make sure that doesn't happen. 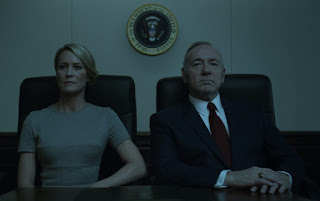 First off, season four is certainly better than the third. Though I will say it's weaker than the original two. Now that Frank is president, he can't do much with his darker side. Though he is a little more "evil" this season than he was in the previous. While I wasn't wowed by it like the original season, I was still deeply interested. I realized I had watched a good majority of the season in just a day. I do hope season five is the last season though, as I think they are stretching the story too far. I'd rather the show end in grace than wander in the realm of semi-boredom. I heard what happens at the end of the original British series, and if it follows a similar route, the finale should be jaw-dropping.

I am a House of Cards junkie!

One of these days I am going to sit down and binge watch House of Cards!

God I hope 5 is the last season.
But I read an article that said House of Cards is Netflix's cash cow. It's cheap to make and bringing in tons of money...so there may be no end in sight.

I heard was good, love Kevin Spacey, I am watching his latest production now!
Thanks for the fact for Easter, you should link up with http://our--beautiful--world--365.blogspot.com/ so our readers can read about that!

We're loyal fans and can't wait to settle down with this latest season.