House M.D. is a TV series I've known about for awhile, but I've never taken much interest in it until recently. I've seen enough of the show to know the character in years past, but I never sat down to see a full episode. This is also (to my memory) the first thing I've seen with Hugh Laurie in the major role. I also wanted to see it because Jennifer Morrison (who plays Emma Swan in Once Upon a Time) is a major character in House. 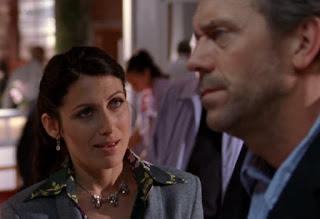 The show is centered around Dr. Gregory House, a cynical doctor who loathes the majority of his patients. He is highly respected for his ability to find and cure diseases that are rare and hard to diagnose. Which is the reason why his boss Dr. Lisa Cuddy tolerates him enough to keep him at the hospital despite the complaints of patients who House mocks or insults because they're genuinely stupid or get themselves into dumb situations. House is also very anti-social, Dr. James Wilson is House's only true friend in the world. 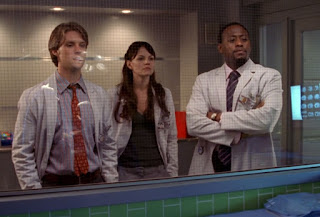 House has a team of doctors who work for him. The first is the Australian Robert Chase whose father is a well-respected doctor. The second is Eric Foreman who is often Dr. House's biggest critic. Lastly there is Allison Cameron who House respects because her beauty could have gotten her an easy life through marriage, but she chose to work hard and become a doctor instead. When a life-or-death case reaches the hospital, it's up to House and his team to solve the mystery. 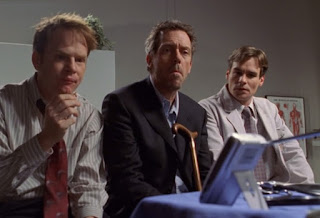 I liked the first season of House, but not as much as I expected. I will admit, it sometimes doesn't make me feel very good as you can get paranoid about some of the things that happens to these patients happening to you. They do really well with the interactions between the characters, and House is always brilliant whether he saved someone's life, or telling an idiot the honest truth in House's own way. I did think it was rather silly that his team is not really that helpful. Practically every case, it's usually House doing the majority of the work and coming up with virtually all the ideas that leads to the patient surviving.

Haven't seen this one either.

I know people who like this program but I haven't watched any of it yet.

I love House. I've been watching re-runs of it.

I loved House and watched it all the time for several seasons. After a while, it got a bit tiresome, but it was fun to see what other diseases there were lurking out there.

I've watched quite a lot of this house in the past. My older daughter introduced me to the show years ago.