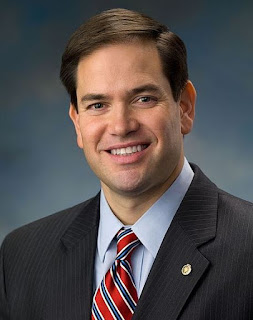 The Florida GOP primary is over and Trump won with 45.5% versus Rubio in 2nd place at 27.1%. Florida is Rubio's home state and the loss was expected and it wasn't surprising to see him drop out afterwards. Rubio was elected in 2010 during the Tea Party wave where Republicans were at their strongest. He's up for re-election in 2016, and liberal turn-out is higher during presidential years, so hopefully Florida voters will kick him out of the Senate too.
Posted by Adam at 12:00 AM

How many more shocks have you got up your sleeve, Adam??
Two loonie bins left on the Republican side.
Where are former senior Republicans???
Why are they so silent, they can't all have laryngitis???
No further comment.
Colin

I saw this in the news yesterday. I guess it was just a matter of time?

Does he even know his way to the Senate? He never shows up for votes or committee meetings.

He made the nicest concession speech...

It was too soon for him. He needed to learn the ropes first.