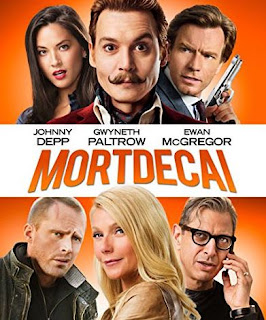 I heard about the movie Mortdecai sometime in either 2014 or 2015. It had a lot cool people in it like Johnny Depp, Gwyneth Paltrow, and Ewan McGregor. I also wanted to see it for Olivia Munn as I remember her before she was an actress, as she was a co-host for G4's Attack of the Show. I also heard it did abysmal with critics. Not everything critics hated is necessarily a bad movie. Could Mortdecai be that terrible? 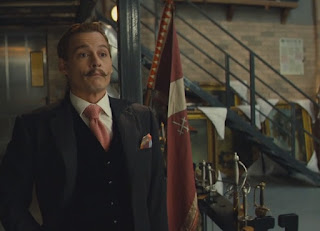 The movie is about Lord Charlie Mortdecai who is a British aristocrat. He also happens to be part of the darker side of the world of art collectors. He's also a bit of an idiot who has the greatest luck in the world. He's often saved by his personal servant, and his beautiful wife Johanna still hasn't left him despite many reasons to do so. One of them is his insistence on keeping a goofy mustache even though it makes his wife wan to vomit. 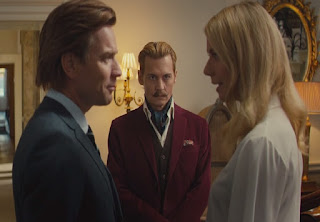 One day Charlie Mortdecai is informed by Inspector Alistair Martland (who happens to have a massive crush on his wife Johanna) that an important painting has gone missing. The woman who was to restore and clean the painting had been murdered. Since Charlie Mortdecai knows the ugly side of the art world, he insists that he lends his knowledge and talents to help solve the case. Unless Charlie Mortdecai makes matters even worse by his own idiocy. 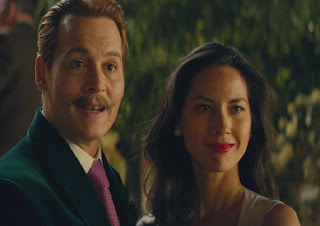 I will say that Mortdecai is the best "bad" movie I've seen in awhile. I can understand why critics didn't like it to be truthful. The story is dumb, the situations are ridiculous, and the humor often falls flat. But there are some funny moments, and the actors and actresses do help more than they hurt the film. It's not one of those movies where you groan or fall asleep, but rather realize it certainly wouldn't be getting any Oscar nominations. I'll probably forget most of the movie five years from now, which is probably what most of the actors in it are hoping too.

As schlocky as this sounds, it has Johnny Depp in it, so it's probably not bad in a quirky kind of way.
Speaking of schlocky, I watched "The Lone Ranger" this weekend. The funniest line was when the Lone Ranger said, "Hi ho, Silver, away!" and Tonto said, "Don't EVER do that again!"

As schlocky as this sounds, it has Johnny Depp in it, so it's probably not bad in a quirky kind of way.
Speaking of schlocky, I watched "The Lone Ranger" this weekend. The funniest line was when the Lone Ranger said, "Hi ho, Silver, away!" and Tonto said, "Don't EVER do that again!"

It'll probably end up some day as a cult classic or something.

Despite the talent and some comic relief, I didn't care for it.

I haven't heard anything good about this one.

This didn't look compelling enough to warrant the ticket price.

Any dogs in this movie?
Maybe Mrs Depps dogs that had to make a hasty departure
from Australia star in a scene??
Should be fun when the case re-opens in court here.
Extradition papers may have to be issued for the Depp appearances.
No way would I be seeing this movie, does your scoring
go down to Z????
Cheers
Colin

I LOVE your reviews, they are honest and fun to read. Never saw this movie but it sounds like a yawn so I probably won't watch it.

I haven't seen it, I hadn't even heard of it until now.