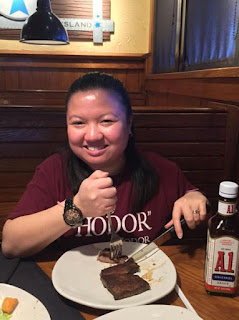 While we usually go to Longhorn Steakhouse, I convinced my wife Daisy to try some of the other steakhouses to see what they're like. This Outback has been there for years, but I've never been. Even though right next to it used to be the mini-golf place (Mr. Putt Putt) I spent many of my childhood years at. I also notice their complimentary bread is much different than Longhorn's (though I prefer Longhorn's) but I liked it better than Texas Roadhouse's. Daisy had gotten a combo which was a salad, steak, fries, and a dessert. By the time it was over, she couldn't finish her key lime parfait, she was full. Will we be back? Probably but it will not be in a great rush I don't think.
Posted by Adam at 2:54 PM

I don't think we have the Outback here, but we have the Keg, which is the same I think. Their servings are always huge! I love how Daisy alway's up to try your shenanigans:D hehe

PS I completely missed that scene with Ned Stark! Is it at the very end? I have to watch it again. And you know, even though I've read the books, the series is so different that I can't even tell which parts of the books these are anymore. Must be from Book 6 which at this point will be released when I'm 60 :(

Outback bread is my favorite!!

I've been to Outback once in Brazil and I loved it!

We have an Outback half a mile away and go there on occasion. It's always good, but never spectacular.


You are making good choices for eating out. We have both of those here and they are very good.

I've been to Outback a few times in the past with my husband. I thought it was pretty good.

Was the steak tender and melt in the mouth - is so, that's good. Nice photo of Daisy.

good idea to try a new place sometimes, even better when it works out.

Outback is my favorite, then Texas Roadhouse..we've only eaten at Longhorns once and didn't like it much....Daisy is so cute.

Gosh! We haven't been to a steakhouse in ages and ages. It's always good to try a different place.

Outback causes my family and some friends severe gastrointestinal problems. We usually can't even make it home without needing a bathroom. However, it's a great tasting laxative!