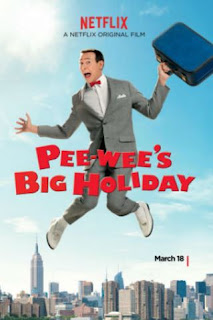 Pee-wee's Big Holiday was something I never quite expected. I was too young for the original series and movie back (when it was new) in the 1980's. I did watch Pee-wee's Big Adventure quite a few years ago and thought it was pretty funny. It was made in 1985 which is over 30 years ago. I will say it's amazing that Paul Reubens looks like he hasn't aged a day since then. But is his (kind of creepy) character still charming and funny all these decades later? 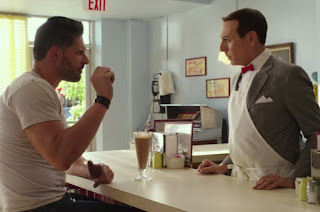 Life for Pee-wee Herman hasn't changed much since the 1980's. He still lives in a plain ol' small town and does a lot of goofy stuff. He works at a local diner, and that's where he meets the actor Joe Manganiello (who plays himself) for the first time. The two are shocked to learn how much in common they have with each other. Joe Manganiello likes him so much that he invites Herman to his birthday party which will be attended by plenty of celebrities. The event is in New York City, which is on the other side of the country. So he'll have to go on vacation to see the Big Apple. 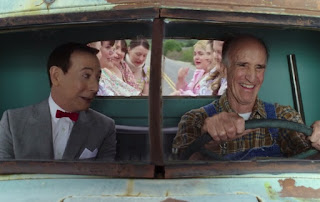 Joe Manganiello tells him that the best part of life is not taking a trip on an airplane, but by taking a grand road-trip across the United States. Herman is excited to go to the birthday party and drives his car all the way to New York City. Or at least he planned to at first. It doesn't take too long for Herman to encounter distractions and a bit of trouble on his way to New York City. Hopefully he can make it there in time for the birthday celebration, or at least make it there in one piece when it's all said and done. 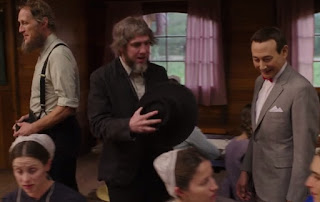 I actually thought the movie would be a little bit of a disappointment given how much time it's been since the last work, but I really enjoyed the movie. Granted the humor of the character isn't for everyone, but I love the goofiness and innuendos that Herman is known for. Obviously if you never liked Herman back then, you won't like him now. There were a few moments that could have been better, but it's been awhile since I've laughed liked I did at a comedy. This one was made just for Netflix, and I have to say they didn't let me down.

definitely worth a try watching this one.

I haven't heard of this one before, sounds good overall

I also passed the 80's babies and their movies. The horror ones and popular style humor are classic. It all depends on ones sense of humor. I'd have to refresh the old PeeWee Herman movies as I haven't seen them since a child. Young child.

I may have to give it a go

Omg I just saw this advertised on Netflix! How the hell does he still look so young? LOL!

Not much of a fan but I'm glad he's making a comeback after his legal problems.

no interest in Pee Wee at all...