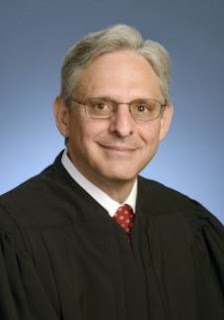 With the death of Antonin Scalia, there has been a empty seat on the Supreme Court. President Obama has nominated Merrick Garland who's been a federal judge and appointed to a lower court by Bill Clinton. Many have described him as a moderate centrist, something Republican should act on. If Hillary Clinton or Bernie Sanders win the presidency, they could nominate Obama which would be the funniest thing in the world to me.
Posted by Adam at 12:00 PM

Right on. If a Democrat wins the election, the Republicans are going to wish they had approved this guy. He's way more conservative than a President hot off the election would nominate.

This is so interesting. I'm going to blog about this soon because I have something funny to share :)

An interesting and very worthy replacement for the Supreme Court of the USA. I looked up his history etc.
A man of impeccable credentials and background.
For this nomination to be turned down by the Republican dominated Senate would show a lack of judicial knowledge and of course bias, bordering on bastardy stupidity.
The highest court in any land should always have a full bench of justices.
A bit of a laugh at your scenario Adam, a President H. Clinton or a President Sanders, nominating an ex-President to the US Supreme Court!!! I would think the Obama's like most ex-Presidents would want a lot of distance between Washington DC and their retirement home.
Cheers
B J Hunnicut aka Colin

In response to Huggybear's comment, a former president has already sat on the Supreme Court. In fact, former President Taft served as chief justice after leaving the White House.

Thank you Stephen. That I certainly didn't know and I must say I am very surprised. Would there have been a reason for this????
Legislation processing would seem a logical reason???
Colin

I just saw a political cartoon this morning showing exactly that scenario.