Question: How Do You Treat The Homeless? 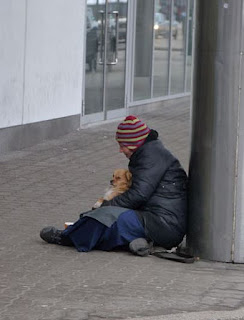 The thought of a someone being homeless does make me feel sympathetic. I live in a small city, so we don't see them nearly as much as those who live in the larger cities. Though I will say that I would never give them anything other than food. While I can't exactly blame them to want to drink their troubles away, it's not going to make their lives any better. Though to be honest, I typically ignore them as honesty becomes rare.

How do you feel about the homeless?
Posted by Adam at 2:00 PM

Most of the people I see claiming to be homeless really aren't and they beg rather than work, and from what I can see there are plenty of jobs available.

We have a large homeless vet problem here. Its something Military Husband and I try to volunteer our time with!

We have "camps" of them here. I never give them money as I am not sure it would be used for a good cause. Some of them do not want a better life. Kinda sad.

I agree with the three comments above. Many of them prefer this "life style", if you could call it that!!!
Colin

I've heard that you are not allowed to beg in New York City. If you play a musical instrument, sing or sell something then it's okay.
See:
http://johns-spot112948.blogspot.com/2012/07/talented-street-singers-in-new-york.html

I feel sad for them. Many suffer from mental illnesses that are not addressed.

A lot of us are only a few house payments away from being homeless...I've bought groceries for them, took them to them, they say "No, thanks, but I'll take money"....pitiful...I won't give them money for booze or drugs...we have a LOT of homeless here in our large town.....

I've learned it's often not their fault, more the circumstances that may have caused their situation. Some cities are trying to give them homes and end homelessness. They are finding it is a win-win situation.

Gosh it's hard to see people homeless for whatever reason.

I live in Montreal, which is quite a big city! I think they deserve the same kindness and respect as anyone else. After all, we are all human beings, regardless of our status.

Hawaii is one of the states with the most homeless per capita. Unfortunately, many just can't afford the very expensive housing prices here. A lot are just sadly down on their luck or have psychological problems. And then there are those that choose that lifestyle. Right now, there's quite a bit being done to provide low cost alternative housing and social work help. There are too many though and they keep arriving thinking it will be easier here without the winters. Unfortunately, it's been very hard on the tourist industry because it looks really, really bad to have homeless tents and garbage piling up in places tourists might go to. It's a sad situation for everybody.

We have tag teams of panhandlers in my area. It's so bad, there's a local Facebook group that has called most of them out on their BS so the rest of us are aware. They have video of them throwing out bags of groceries in the dumpsters (they want cash), they go straight into the gas station after getting gas to buy cigarettes and lottery tickets, and then there are the ones who hop in nice cars after begging all day long. It's a shame because I think they are desensitizing us to the real homeless issues in our community.

I disagree strongly with Stephen's statement...how would he know that? Why do we assume they are not really in need? Who am I to make that judgement?