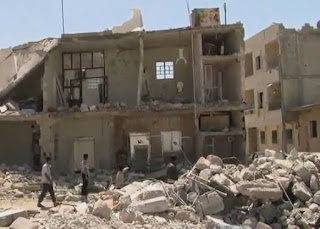 Putin has now let the world know that Russian troops will leave Syria very soon. I'm actually glad to hear the news as I didn't believe their actions there caused much good. There are four sides in the Syrian Civil War, and Russian involvement seemed to mostly help the regime of President Bashar al-Assad against the rebels in Western Syrian. They didn't do much to the monsters causing havoc in Eastern Syria.
Posted by Adam at 10:00 PM

I agree. I think that the Russians skewed the power so that the conflict would last longer. I really think the whole mid east is going to end up a total mess.

If the Russians are leaving, let's hope it's because a true peace deal is imminent. The carnage in Syria must stop.

I'll believe it when I see on the International news, and for that matter the local ABC nightly news here in Australia, military convoys with Russian flags crossing the borders back into Russia.
It took 10 years before the then Soviets left Afghanistan with their tails between their legs. It would do well for the N.A.T.O countries to do the same, led by the almighty US. This is a volatile and repressive region, now and always will be even before Alexander the Great tried to subdue it to be civilised as civilisation was in those BC years. Let them kill themselves. No so called western nations from earliest civillzation has ever conquered this region - many have tried, none have succeeded.
The reason - these days is OIL!
If the USA wants more OIL, dig up the whole of Texas, that should suffice.
Where was the the US aid to Nepal after the earthquakes of last year?
A measly $2 million, ( well US tourists go there for Mountain Climbing experiences), where was the US aid to Fiji with the recent catastrophic cyclones - AID - Zilch.
No oil in Fiji or the surrounding Pacific Ocean bed!

Bashar al-Assad is a despot, but he did serve the interests of the USA at one time, or have you forgotten???
Colin - I will this time and dispense with the Captain B J Hunnicut of the 4077 M.A.S.H. He would be disgusted with the World of today plus this 2016 Presidential circus.

I agree with the comment above:( All these world powers meddling with issues all over the world has never amounted to anything good EVER!

Thank you Emmylou of Scarborough, Ontario, Canada.
We have here in Brisbane a seaside suburb on the north side which is on the coast. It is quite an affluent suburb with many places for holiday accommodation of the "B & B" variety.
Believe you me in climatic terms, Scarborough Brisbane is nothing like what you experience in your
Scarborough, Ontario.
Akin to "chalk and cheese".
I hope readers note your final word - EVER!
Cheers
Colin

so many vile and ignorant propaganda here, Adam, in comments especially. I wish people would not talk about things they know nothing about especially things which influence other people lives. It is so sad seeing people like Huggybear and others who sit in their comfy armchairs billion of miles away throwing ignorant comments around. It is one of the ways to spread more evil around the world.

Dezmond
Have you been drinking?
What in the name of sanity are you talking about?
1. I can't sit in an armchair due to a back problem.
I sit in a straight backed chair.
2. From Bucharest ( where you may be from???) to Brisbane, Australia or to the above Ontario address, it is NOT a billion miles.
3. Please control yourself.
Most cordially and with great concern for your health.
Colin

Interesting comments here. I think too many entities are playing war in the Middle East right now. It should be up to Arabs to transform this region into something more productive.