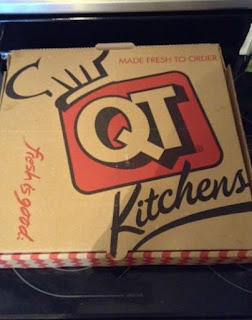 QuikTrip "QT" gas stations came to my area a few years ago, and they're so superb they've had no difficult  time growing over here which had a few of the smaller gas stations closing their doors. They recently came out with QT Kitchens which makes different kinds of baked goods. We've tried their doughnuts before which were good, but I decided to try their XL pizza. 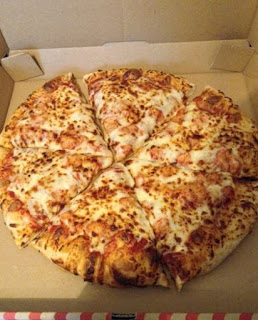 It was decent but not quite as a good as Papa Johns, Dominoes, or Pizza Hut in my opinion. I thought the cheese was the worst part about it. I also like to eat my left-over pizza cold, and it was still pretty good. It's about the same value to get a pizza here versus like a Papa Johns, so I really don't think I'll be getting another one though.
Posted by Adam at 12:00 PM

It's still nice to try different pizzas to see what's out there!

The worst pizza I ever had was wonderful.
Except that green pepper, onion, and possum one, though. That was kinda nasty.

The worst pizza I ever had was wonderful.
Except that green pepper, onion, and possum one, though. That was kinda nasty.

The pizza looks great. I like thick crusts, then again I like thin crust pizza too. : )
Don't have any of those out my way.

Every once in a while I find a really goof local pizza place.

We have Dominoes and Pizza Hut here, but not Papa Johns or even QT stations. So interesting that gas stations there sell pizza too!

That looks good tho!

We live at the edge of town, about 2 miles out from the city limits and last summer a Dominoes opened just down the highway and we were thrilled...they make an excellent pizza...

It looks good though.

Never heard about QT, but this pizza looks great, made me want to eat so much ;)