Truck Gets Stuck on Portland Bridge 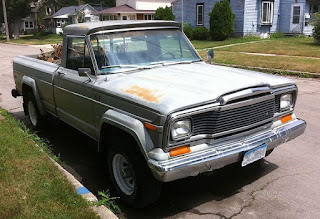 Now I think most people know that the drivers of pick-up trucks are often not the smartest folks in the world. A driver recently drove his pick-up truck and got stuck on the new Sellwood Bridge in Portland, Oregon not even a a full day after its grand opening. The driver drove right into the pedestrian walkway, and by the time anyone noticed both the drivers and keys were gone. Many cyclists and walkers had to turn back until a crane literally had to take the truck off the bridge so traffic could return to normal.
Posted by Adam at 12:00 AM

Email ThisBlogThis!Share to TwitterShare to FacebookShare to Pinterest
Labels: Oregon

So he abandoned ship then!
That vehicle is called a UTE down here, and are good drivers, well most of them are.

Very irresponsible and I hope the driver copped a hefty fine.
Happens here also, so Oregon is not an orphan on this "silly business".
Quite a few of our "drivers" who do this - do "a runner" as the vehicle is often stolen! Thankfully they do get caught and justice runs its course. I hope the Oregon culprit(s) was/were caught???
Colin

I wonder what kind of trouble the driver got into.

Interesting that I live in Portland but didn't hear about this.

Well...out here in Texas, a LOT of us drive pickups..my son, for one, and he is one of the smartest people I've ever known...driving a pickup doesn't mean we aren't as smart as everyone else......