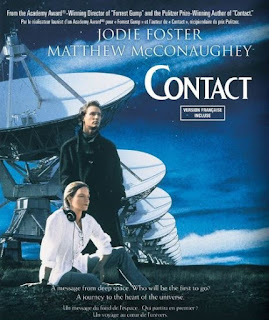 Carl Sagan was one of the most brilliant scientists the world has ever known. The world lost a great man when he passed away in 1996. He had died shortly before Contact was finished which was based on his 1985 novel which originally was suppose to be a movie before it morphed into a book. I never read the novel but I heard some good things about Contact but knew little about it. I figured part of the plot was based on Carl Sagan being inspired by the WOW signal of 1977. This is also the 2nd movie I've seen where I've noticed Matthew McConaughey. The other was Interstellar which is also about scif-fi and space-travel. 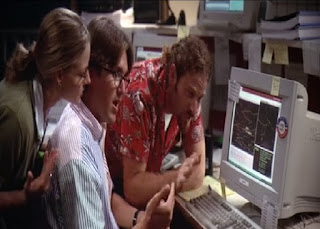 The story is about the life of Dr. Ellie Arroway, who is a brilliant scientist and she's also a little obsessed with finding life outside the solar system. She's been fascinated by outer-space since she was a little girl. She joins a research team tasked with finding any evidence of life in the universe besides the ones on Earth. One day she hears something strange and decides to investigate further. To a regular person it would appear that it would be nothing more than random noise. But her team takes the time to see if there is any meaning to it. They figure out the origin of it came in the area around the star we call Vega. 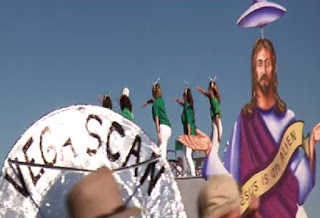 They end up finding proof of alien life which is solid enough to have the whole world watching. The government comes to take over on her project to her objection. She's allowed to stay on, but she's no longer in much control of anything herself. The finding causes a bit of  a culture war around the world, especially in the United States. Some people think it's neat, some think it's nothing more than a hoax, and others are deeply opposed to it on religious grounds. Ellie will also be dragged into conflict with religious leaders who aren't too happy that she doesn't believe in God or any kind of Supreme Being at all. The only thing Ellie, her supporters, and her critics can agree on is the pursuit of the truth. 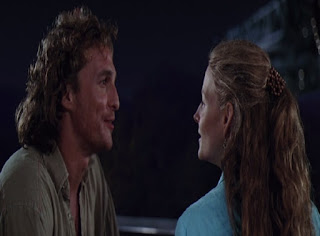 At first I thought the initial thirty minutes was an alternative to sleep aid medicine, but afterwards it gets really interesting. The ending is phenomenal, and really breaks down any expectations you may have had earlier. It's a mix of real science and sci-fi, but even the "fiction" of it do sound a little probable. I also enjoyed the clash of science vs. religion, a subject Carl Sagan (who was agnostic) tackled in real life. I also enjoyed this one because it was an alien movie that wasn't just plain silly and honestly not like many others that ever existed. The movie may be almost 20 years old but I was very impressed.

haven't seen it but not a McConaughey fan...

Your not? With his accent and all that? I'm shocked. Shocked, I say, shocked :-)

Yes, this film is unexpected! The plot developes in a very intriguing and interesting way; I still remember those giant "space devices"...
By the way, I didn't know it was originally a novel!!
Have a noce Sunday!