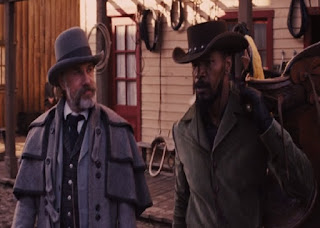 One of the best film directors ever (in my opinion) is Quentin Tarantino. His movies aren't just good, they often shatter perceptions about stories and characters. I think most consider his best work to be Pulp Fiction, but he's one of the few directors to never make a truly bad movie. Even Steven Spielberg can't say that, though I would say I'm sure he wishes he could forget things like War of the Worlds. I don't know why I waited so long to see Django Unchained, especially as one of my favorite actors Christoph Waltz is in it. Before 2015's Hateful Eight, this was Quentin Taratino's latest work, but is it his very best? 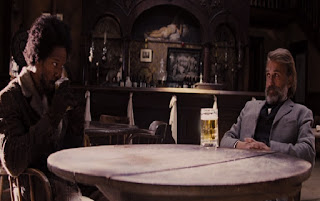 The story starts with a German dentist named Dr. King Schultz, who left dentistry to become a bounty hunter in pre-civil war America. He's looking for a trio of brothers with the last name Brittle. He finds a slave named Django who happens to know what the Brittle brothers look like. In gratitude for his help, Dr. King Schultz helps make Django a free-man. They bond in friendship and Schultz agrees to help Django in a important task. Awhile back Django and his wife were separated after getting caught trying to run. Schultz helps Django while teaching him how to be an excellent bounty hunter like himself. 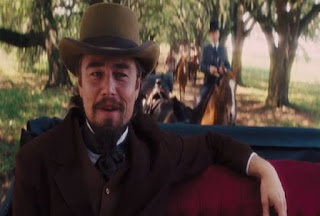 Schultz is surprised to learn that Django's wife has a German name, Broomhilda von Shaft. This makes her a little easy to find, because there aren't many women like her that speak German. They find out she is owned by Calvin J. Candie who is the head of a ranch called Candyland. Calvin Candie has a rather notorious reputation, so they can't just walk up and just ask for Broomhilda that easily. They devise a plan where they befriend Candie as businessmen and try to get Broomhilda back through this mission. 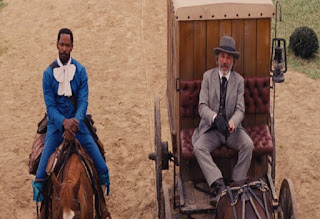 I'm not surprised that I really liked Django Unchained, as it really did deserve the Oscar for Best Original Screenplay (Argo won Best Picture that year) for the year of 2012. Though I will say not so much the ending but the later parts gets a tad ridiculous. So I don't think it's quite Quentin Tarantino's best work. It was interesting to see Leonardo DiCaprio as an antagonist but I think he played his part well. Christoph Waltz won the Oscar for Best Supporting Actor for his role as Dr. King Schultz, and I think he really did deserve it. I think it's probably the best character he's ever played. If you don't like Tarantino's work, you'll probably won't like Django Unchained but for those who do, you should not wait long like I did.

I've heard good things but haven't seen this one. Too many movies and not enough time...or money.

I think either you really like Quentin Tarantino's work, or you just plain hate it. I happen to love his work, but haven't seen this one yet. I'll be sure to catch it on our next movie night.

This wasn't my favorite of Tarantino's. It was eh...
My fave is Kill Bill and Reservoir Dogs.
AND Grindhouse: Death Proof. Best badass chick movie everrrr.

I just saw this recently and couldn't stop gushing about it! I love Tarantino. I this movie ranks right up there with Kill Bill IMO.

Hello Adam - having seen your name on the many blogs I visit I thought I must come over to your blog!

Quentin Tarantino is a great favourite with the men in our family, although I did sit and watch Django Unchained ...

Hmmmm... I'm afraid it was much too violent for me. I had my head turned away a lot.

And I was really upset that a certain character got killed.