Fact of the Day: Church of the Flying Spaghetti Monster 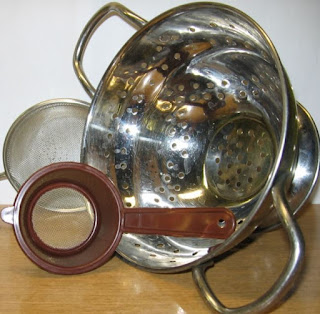 In 2005 a man named Bobby Henderson created a parody deity named The Flying Spaghetti Monster in a protest against the teaching of "intelligent design" and creationism in schools. The parody deity was to make a point that you can't exactly prove or disprove his existence like the Abrahamic God. The "religion" often parodies the Bible, for example in the "creation myth" the Flying Spaghetti Monster created the universe after drinking heavily. Followers of the parody religion call themselves Pastafarians and will wear colanders (used in making spaghetti) on their heads proudly. They will often demand to wear them when it comes time for a drivers license photo citing religious freedom.
Posted by Adam at 12:00 AM

He boiled for our sins.

Totally bizarre.
Such childish nonsense, but I don't believe kids in play school activities would come up with such a looney idea.
I have a strange feeling that I have read all this rat baggery before and it certainly was NOT in any Australian publication.
Colin

Proving anything can be a religion if you try hard enough

I've heard of this but only in a limited way. Thanks for the info.

I'd heard of this but didn't know all the details behind it.