Fact of the Day: Communist Albania 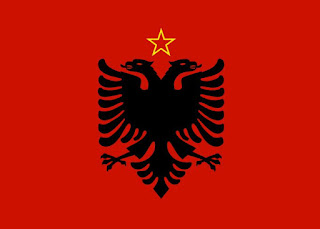 While the Soviet Union basically controlled Eastern Europe, there was a exception with Albania. They were a communist nation as well, but they sided with China after their relationship with the Soviet Union crumbled after the death of Joseph Stalin. Like China they opposed the de-Stalinization of the Soviet Union under Nikita Khrushchev. Just like China they also opposed his belief that the communist nations could peacefully co-exist with the West. Because of this, Albania lost the vast majority of Soviet aid though China would help fill the gap of what they lost.
Posted by Adam at 12:00 AM

One of the most oppressive of all Communist countries ex-WW2.
Run by an evil genius called Enver Hoxha, who I think even the devils of so-called Hades would have not let enter.
Here:
https://en.wikipedia.org/wiki/Enver_Hoxha

Thankfully after Hoxha was overthrown - Albania has returned to normality and is a tourist (cheap) holiday destination of today and as it was pre WW2.
B J Hunnicut aka Colin

Least Albania didn't lose out all together.

Well when you have China, you hopefully won't starve

So many of those Eastern European countries suffered terribly under communism.

So much history in those countries.