Fact of the Day: Franco-Ottoman Alliance 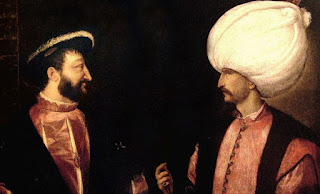 In the 16th century King Francis I of France found himself desperate to counter the power of Charles V the Holy Roman Emperor. He failed to ally with England, so he reached for friendship with  Suleiman I, Sultan of the Ottoman Empire who also did not like the power of the House of Habsburg. This was considered very controversial at the time for a Christian king to ally with a Muslim ruler. Francis I defended his actions as he wanted to be sure that Christians were protected in the lands of the Ottoman Empire.
Posted by Adam at 12:00 AM

An alliance of convenience - still happens, nothing new about this really. May seem a long time ago, but in those days "The House of Hapsburgs" were very powerful. Just check the size of their empire in that period.
Colin

At least the Habsburgs commisioned great art in their day.

In other words he just wanted to win