Fact of the Day: Jefferson Exception 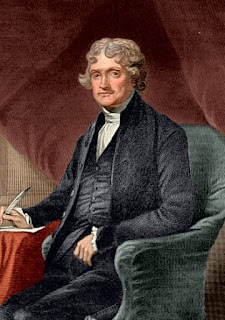 For most of his political career, Thomas Jefferson believed in a strict philosophy that anything that wasn't specifically mentioned in the U.S. Constitution could not be done without an amendment. That was until the Louisiana Purchase (which doubled the size of the United States of America) where mere congressional and presidential approval was just fine on the matter.
Posted by Adam at 12:00 AM

Hmmm
Interesting - some things in the USA haven't changed.
Your amendment that sanctions the bearing of arms.
I don't see the French, English, Spanish or Russians coming back to reclaim their "once" territories.
B J Hunnicut aka Colin

That is really interesting Adam!

Funny how we always "bend" when it's in our best interests.

Most politicians change their opinions when pursuing their personal agendas.

It's interesting how things can be changed sometimes...