Fact of the Day: Thomas Wolsey 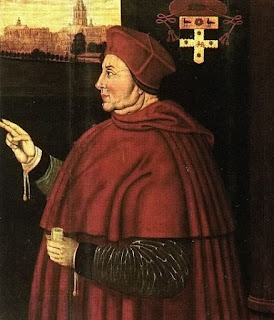 Thomas Wosley was a Catholic Cardinal in England who became very notable during the reign of King Henry VIII. He attempted to persuade European powers to end all wars with each other as they were all Christian and believed they should have no reason to be at war. This plan obviously failed as countless wars and conflicts would plague Europe for centuries.
Posted by Adam at 12:00 AM

Email ThisBlogThis!Share to TwitterShare to FacebookShare to Pinterest
Labels: Catholic, england, fact of the day

that would be the day, when everyone was at peace

A man of immense power and influence but not up to the wiles of Anne Bolyen and her intriguers in the Court of Henry V111.
Fortunately on his way to London to stand trial and no doubt hideous torture before losing his head, he died of natural causes.
Poor young Anne was unfortunately not given the same "natural reprieve" - she lost her head to the axe.

I am not totally in belief of Wosleys "maxim" of a then European war free World !!!! Still he never lived to see if his "maxim" would come to fruition.
B J Hunnicut aka Colin

At least he did try.

Worth a shot, even if humans are too dumb to stop warring

At least he tried!

interesting to know. well, at least he tried!

Poor Wolsey learned the hard way that Henry VIII was not a man of peace, and not a forgiving man.

Peace is sadly impossible.
We are all too different. From race to religion to politics. Just too different.
And of course, we have to deal with bigots.

... and still wars and un-rest continue throughout the world!

have to give him an A for trying, I guess

Heard about you from Low-carb Diabetic. Studied Wosley a lot at school and have always been quite interested in the Tudor period.