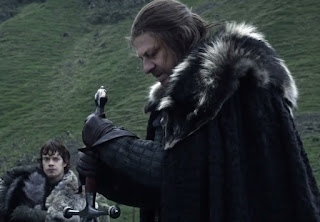 Unlike my previous quotes, this one comes from the realm of fiction. This quote was said by Lord Eddard Stark from the Game of Thrones TV series and the A Song of Ice and Fire novel series. He says this to his young son Bran after the execution of a Night's Watch deserter and in the book you hear the full explanation "If you would take a man's life, you owe it to him to look into his eyes and hear his final words. And if you cannot bear to do that, then perhaps the man does not deserve to die". Ned Stark was the highest-ranking person in his section (The North) of Westeros, and did not leave this duty to an executioner like his friend King Robert Baratheon did at the capital. While I'm against capital punishment in the real world (I don't believe the government should have the power) I'd be less against it if the task was left personally to Governors.

And for fans of the show, don't forget that season six starts tonight!
Posted by Adam at 12:00 PM

I miss Eddard Stark in the series.

Game of thrones is such a source if wisdom ;)
Can't wait for tonight's episode! :D

I tried watching it a few times but I just couldn't get into it.

I've never watched this show but my husband mentioned recently that we should get into it starting from season one, of course.

Mrs. Chatterbox is counting down the hours until tonight's GOT episode.

My daughter is a fan of the show and has warned me against spoilers!

We LOVED GAME OF THRONES. However, we will not get to see it this season. We cut out HBO to cut some cost. Afterwards, me and my husband looked at each other and was like, "OOPS" no more Game Of Thrones". We will just have to catch up some other way. Any suggestions?
Lisa