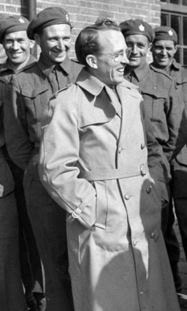 "The inescapable fact is that when we build a society based on greed, selfishness, and ruthless competition, the fruits we can expect to reap are economic insecurity at home and international discord abroad." -Tommy Douglas

Tommy Douglas was a Canadian politician most famous for starting the process that got Canada universal health care on a Federal level, and he's also Kiefer Sutherland's maternal grandfather. While I'm not Canadian, I've admired the man for many years. He was basically the Bernie Sanders for his country and his time. Advocates for anarcho-capitalism are blinded by their own greed and delusions. An economy extremely focused on the greed of the few will crumble because the many won't have the income to go out and keep that economy moving.
Posted by Adam at 1:00 PM

This is the first I've heard of this interesting fellow.

Never heard about him. Sound like he was clever!

I have a few Canadian friends on fb and they are always complaining about their health care over there.

Interesting - I must look him up for more information.
Maybe it's my early morning eyes - but he has a striking resemblance to Bing Crosby entertaining troops in WW2 and I think they look like Canadian troops in the background???

I don't think he'd nowadays be on the Christmas card list of Donald T or Teddy C, eh?
Cheers
Colin (B J Hunnicut)
PS: Those Canadian troops might have been in Korea near the 4077 camp??

Thanks Adam for that education. I have read all what is
in the above. Well worth your viewers to take the time
to read. A most interesting, clever and courageous person.
Pity there are not more like this man today. The World would be a far better and safer place.
Please note the part on his leg operation - that is the cataclysm for his political and social career.
Colin

He was voted "the Greatest Canadian" a few years ago.

Good post, Adam. This is definitely a great Canadian!