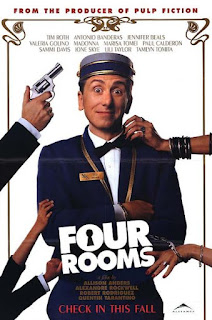 I had honestly never heard of Four Rooms until just recently. I learned that it was a Quentin Tarantino film, and then realized he only partly-made it. It's also a comedy for the most part unlike his other movies which are far more serious. The movie is made up of four main storylines with each directed by a different person. One is by Allison Anders, another by Alexandre Rockwell, the third by Robert Rodriguez, and the last by Quentin Taratino himself. I had never heard of the other two people before, but I do know of Robert Rodriguez. The movie also has a ton of talented people, so was it any good? 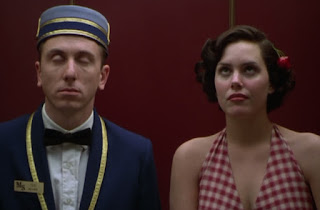 The story is about a hotel bellhop named Theodore who prefers the name Ted. He starts at a sorta-fancy hotel where in one night he encounters many wacky guests at different times. The first is a group of women all claiming to be witches. And they all seem to have a different idea of what being a witch is. But things get weird when they start a magic spell and Ted gets mixed up with it. He also faces a rather disturbing fellow who may very well be the end of Ted if he is not careful. Though Ted is unsure whether to take him seriously or simply laugh it off and pretend everything is okay. 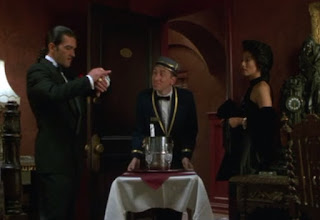 Another guest wants to spend the night drinking and dancing with his beautiful wife. The problem is that they have two children. The dad has the idea of letting the TV baby-sit them, but when Ted shows up he gets the duty of being a part-time babysitter. Something that wouldn't be difficult if one of the brats was nothing but trouble. His night gets even more interesting when he's called up to meet a famous movie director named Chester Rush who's staying there as a guest. When he arrives, Chester Rush and his friends are mostly drunk. And their ideas while drunk aren't exactly smart to put it nicely. 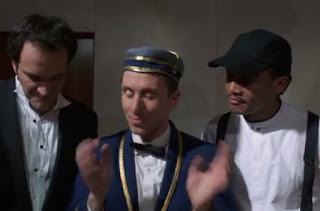 Four Rooms was very much hated by critics back in 1995. I understand why as the first two parts aren't that brilliant. Even Quentin Tarantino's segment isn't quite up to par to his usual works. Though he does act during the whole part of it so I can't fault him for taking it easy as I'm sure acting and directing at the same time is no easy task. The part of Ted was originally suppose to be portrayed by Steve Buscemi but he was replaced by Tim Roth who made Ted a very memorable character. Robert Rodriguez's segment was by-far the best, and if all four were roughly the same I think the film would have been as notable as Pulp Fiction or Reservoir Dogs. Though I think most of Tarantino's fans will like it.

I've never heard of this one. I'm a Tarantino fan, so I'll check it out.

A comedy by Quentin Tarantino? Surely, someone's head is blown off.

A comedy by Quentin Tarantino? Surely, someone's head is blown off.

I haven't heard of this one before. I'll keep an eye out for it though.

Don't remember this one.

These "strange" so-called quirky comedies do not attract
my attention.
The Academy Award winning and winner of many other film awards, "The Grand Budapest Hotel" which had a stellar cast
was enough of this type of movie for me.
I went to a charity event showing of it and many of us walked out rather than be confused/bemused and enjoyed the drinks and nibbles in the foyer area.
Nah Adam, "Four Rooms" will be not on my agenda.
You must be congratulated, as you do "do" a good precis or review of your movies.
B J Hunnicut aka Colin

I love this film

haven't seen it..i do appreciate your reviews..you've sent us to some great movies..and saved us money on bad ones..:)in fact, it's to the point that when I mention a movie, he says, "did Adam give it a good rating?"
hahaa...gotta love it.
thanks...