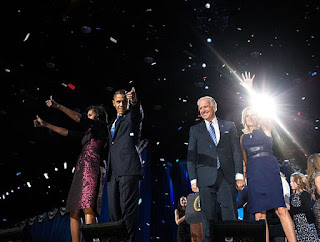 As a liberal Democrat, I was delighted to see President Obama win his 2nd term in 2012, but the conservatives in my red-state of South Carolina were not. I knew a guy through work who had claimed he'd lose in a landslide, and then after he was wrong he claimed that by the time 2016 came that we'd see the Great Depression Part 2. He even went far enough to claim that people would be so poor that'd they'd have to eat domesticated animals like dogs and cats to survive. Now it's 2016, and the country for the most part has gotten better since 2012, and especially since the economic crisis of 2007/2008. I guess he was just a tad wrong in his prediction eh?
Posted by Adam at 12:00 PM

About as wrong as predictions the East Coast would be underwater by now.
Meh. Everyone's full of crap.

About as wrong as predictions the East Coast would be underwater by now.
Meh. Everyone's full of crap.

I thought that season premiere was too short:( Wish they made it longer, as I did want more action, but I guess we have to wait for that. You know...I completely forgot that Myrcella died! And so was not expecting Prince Doran to die, coz he was still alive at the end of book 5. Man...I wish the book 6 and 7 would come out soon so I know what to expect! :D

This hardly qualifies as a funny story. Conservatives/Republicans always try and manipulate the vote through fear mongering. The US economy is doing fine, and historians will credit Obama for this as well as saving the auto industry and much more.

Nah, I bet that idiot still wants to eat his pets.

I think he's had that tin-foil hat on for too long.

I believe after hearing and reading some of the most outlandish predictions from some "Bible Bashers' and racist
bigots that the US would be
1. Swamped with Kenyans
2. Would become a Muslim state
The list was so unbelievably ridiculous that one wondered
on what planet these bigots lived.

I think Obama will go down as a President who did his very best to unite, keep the peace and improve the standards of the "lesser fortunate" and now please read carefully - the LESSER FORTUNATE WHO WANTED TO HELP THEMSELVES - NOT THE BLUDGER BRIGADE who exist in ALL countries ( unfortunately).
On the World stage Barack Obama was most impressive.
Colin aka B J Hunnicut

My guess is that he just doesn't want a democratic President no matter if he/she is good or bad.

Some of these people ave been brain washed.

Red my good mate from the cold of Alberta.
I have my doubts if you can "brain wash" a brainless person??
Thank God you have your young and aspiring Justin Trudeau. He is a breath of fresh air on the International Stage.
Colin

We talk back and forth about Game of Thrones, regardless of what's on our blogs.