I Had My 3rd Car Accident Last Night 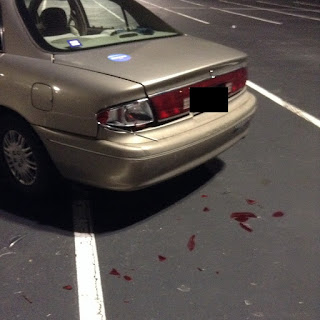 Luckily I've never been at-fault, and this time I wasn't in the car. Some new kid at work backed into my car and busted the tail light and it also moved my car quite a bit. He tried to do things "under the table" and I told him I had to talk to my mother and the insurance company first. He wasn't the smartest kid because he was apparently off-duty and with his friends and they left. He called me on the phone and I told him I'd have to call the police about it. He didn't have the common sense to return, and the state trooper had to call him. He was lucky he just got a warning not to do something stupid like that again. Now I have to go through the headache of taking it somewhere to get it fixed... Lucky me!
Posted by Adam at 6:00 AM

Sorry to see this photo of your 'busted' car.
At least it can be fixed but yes it is a 'headache' going through the paperwork, time, inconvenience involved ...

However, the most important thing is you are ok.

Oh goodness Adam. A nuisance but at least you are safe.

The headache of getting it fixed is annoying indeed. At least it was only a tiny accident

ohh :( It's really sad accident :( I hope, that everything is ok.

Bummer. Yes, he must have been backing up really fast to have pushed your car askew like that. Probably just got in the car, threw it in reverse and hit the gas.

Is that a Bernie 2016 sticker AND an equality sticker?

With those stickers, if you lived here in Houston, you'd have damage to your car every time you came out of a store.

Hope you get the damage worked out quickly.

Maybe your car was hit because of the terrible way you parked your car. It's supposed to be inside those parallel white lines. Ha! Just kidding. Glad you're okay.

Oh Adam, so glad you weren't even in the car what a nightmare

It shakes you up to come out and find your cars damaged.

Oh man! At least you weren't in the car and injured.

Sorry to hear about this, Adam. It's a real nuisance. But at least you're okay.

I was concerned when I read the title, too. Glad you're okay.

Thankfully it doesn't look too bad. Glad you weren't hurt!