My Favorite Photos: Monkey in the Middle 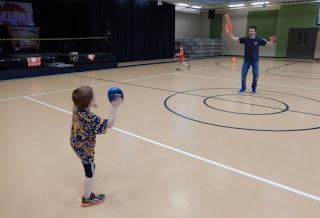 During my nephew Mr. K's birthday party in very early April, it was held in a church's gym they called the Life Center. We got there early so my nephews eventually wanted me to play monkey in the middle which the goal is to the pass the ball between two people with a person trying to intercept it. After awhile Mr. C told me to put on this foam sports Clemson finger. I'm guessing he wanted it to water-down my obvious advantage even though I let them win every now and then so they don't get frustrated, I've learned that he's a sore loser. 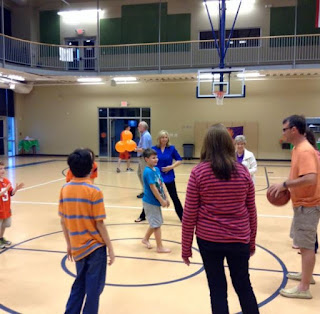 Near the end of the party, almost everyone was playing the game but with a basketball. This was funner because with all the people it can be quite chaotic. If you didn't want to be "the monkey" you had to do your best.
Posted by Adam at 5:00 PM

You seem like the kind of uncle most kids would love having.

We call this KEEP AWAY and it's a lot of fun...glad he had a good party.

Looks like fun! You're a good uncle, Adam. My brother is terrific this way with my daughters and they both adore him.

Look as if fun was had.

We like playing this with our dogs. They are sore losers also ;)