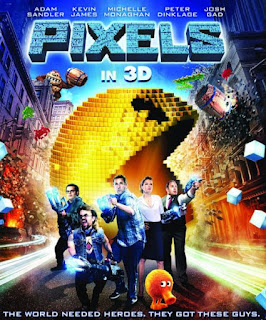 I noticed the trailer for Pixels back in either 2015 or 2014. I'm a big video game nerd, so it did appeal to me a lot. The trailer was also pretty funny, so it looked promising. I also wanted to see it because of Peter Dinklage because I really like him as Tyrion Lannister on Game of Thrones. Fans of the TV show will also enjoy seeing Sean Bean (who played Lord Eddard "Ned" Stark) make a minor cameo in the movie. The initial reviews came out and the critics acted like it was the worst film to ever be made. Though they are never very kind to most Adam Sandler films especially when he partners with his buddy Kevin James. About a month or two later, I heard some opinions that made it seem like most of those critics over-reacted. So who was right and who was wrong? 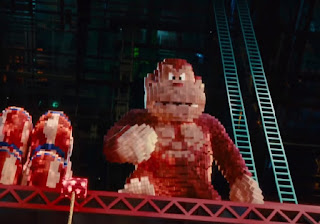 The plot of Pixels begins in the early 1980's with two friends Sam Brenner and Will Cooper going to a video game championship. Sam is good enough to go on to the finals where he faces the obnoxious Eddie Plant in a final game of Donkey Kong. Sam ends up losing and the rest of his life is not so glorious. His old love for video game comes in handy when aliens receive a message from Earth (with a tape of video games and 1980's culture) and take it the wrong way. So they send video game "warriors" to Earth as an act of war. The armies of Earth are helpless to stop them. 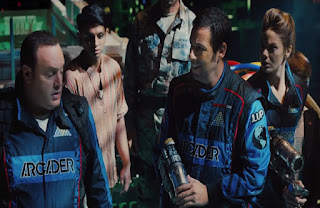 They realize the only way to stop them is to defeat them just like it happens in the video games. The President of the United States asks Sam Brenner for his help. He gathers a team of friends and his old foe Eddie Plant joins the squad of Arcaders. Thanks to a team of high-tech scientists, they are given tools to face the waves of alien foes resembling classic video game characters from the 1980's. But if they lose this game, then it's Game Over for Earth, literally. There is no reset button and they don't have any more quarters. 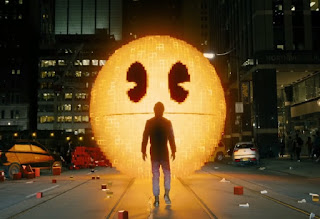 Overall Pixels was a lot better than I thought after critical reception. While I'm a video game nerd, I think the movie might appeal to more than just my generation as there's plenty of people who aren't "gamers" who fondly remember the days of Pac-Man, Donkey Kong, and Centipede. Most of the fumiest moments were spoiled by the trailer, and Peter Dinklage's character is made to be too unlikable. They based him off of the real-life Pac-Man and Donkey Kong champion Billy Mitchell who isn't nearly that obnoxious and one-dimensional. Just like Adam Sandler's other film Click, it has a wonderful idea for a story, but it's often too silly and stupid for its own good. And some of the "jokes" could have been a lot better. Though the Qbert and Lady Lisa "joke" at the end was wrong, but still I thought that one was hilarious at the same time.

Have you tried any Finnish games (https://en.wikipedia.org/wiki/Category:Video_games_developed_in_Finland) like Angry Birds? Thanks for stopping by my blog!

Omg! I loved this movie. I thought it was so 80s and adorable. Haha, I love Adam Sandler. He does no wrong in my eyes, even when the movie is just so so. I hear he is an amazingly humble guy.

Thanks for the review. This film did interest me, but like most films, I have never gotten around to watching it.

It was better than I thought it would be. I used to play all those video games when my family went out for pizza, the video game machines would be in the back. I was forever bugging my mom for just one more quarter. lol

Never got around to seeing ths one, and probably won't.