South Carolina Gets Their Own Bathroom Bill 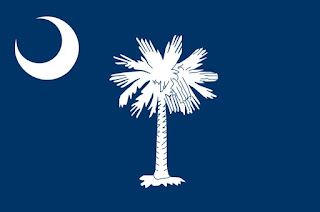 While I'm proud of companies and people giving North Carolina a boycott over their HB2 bathroom bill, it doesn't surprise me to see the same come to South Carolina's state house even if the bill hasn't been voted on yet. Senator Lee Bright (who's doesn't shy away from being a giant bigot) introduced the bill in the State Senate which for the most part mimics NC's bill by limiting which bathroom you use to your "birth" gender. I've known a female-to-male transgender person in real-life, and it was hard to tell that the person was born female. Do they really want that in a women's bathroom? How about we have a bill where it says that the "birth gender" of a person is nobody else's business?
Posted by Adam at 11:00 AM

I think all bathrooms should be unisex with privacy and a sink in each stall. Women are at a terrible disadvantage when it comes to public restrooms and shouldn't have to wait in long lines while the men come and go without a wait.

Agreed, let people live their life especially they are not hurting anyone!

I saw a meme recently that perfectly sums things up. "It's not about bathrooms. Just like it was never about water fountains."

Perhaps if those in favor of these bills used their time to help others rather than foster hatred, the world would be a much better place.

I had not read about this one. Unless they are going to stop and check everyone at the door, how is this really going to work?

Terrible. This is discrimination.

or me it's about the long wait. I don't care what 'gender' you are. Get off the pot!!

Too many of these wise guys have blinkers on. They cannot understand anything that's different.