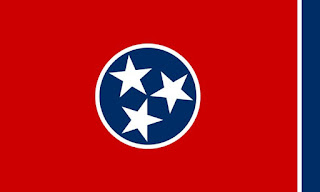 About a month or two ago, I noticed the the State House of Tennessee was considering a bill that would make The Bible the official state book. Official things for U.S. states are very pointless, but I'm a firm believer in the 100% separation of church and state and I'm glad it got vetoed. Supporters of it claim many different reasons why they do, but imagine those same people if they had voted to make the Quran the official state book. I don't think they would be very happy now would they? Just like the motto In God We Trust, this is a metaphoric kicking and screaming by the loss of a Christian monopoly on America which was decided long ago by the military power of European nations from Rome to Great Britain.
Posted by Adam at 11:00 AM

Unbelievable to even think this was EVEN contemplated.
What with the uproar of ISIL wanting the Koran (QURAN)as
the book of their controlled areas and for that matter the World, I guess people in "Glass Houses" aka Tennessee to even "moot" this bizarre idea, shouldn't throw stones!
My American friends from my many travels to the USA always
told me - if you want to see a ZOO go to Tennessee, Alabama or Mississippi. Thankfully I listened to their advice.

I certainly hope that this rubbish doesn't make the news here or gets some TV coverage - the antics of Trump and Cruz are bad enough for the US tourists to have to endure.
Maybe this is one reason why the US per head of population has one of the lowest rate of overseas tourists - cruise ships to the Caribbean doesn't count! Anyhow 50% of the cruise line US passengers don't get off the ship when in port!
Colin

also glad it was vetoed...

I also support 100% separation of church and state.

Yes, church and state must be separate. Religion gets pretty irrational.

Well there you are Adam - 5 in agreement.
Church and State MUST be separate identities.
The Quran and the Bible stick to all things ecclesiastical
and the government elected people stick to the "GOOD" running of the country.
Colin