Two Of Donald Trump's Children Can't Vote For Him In Primary 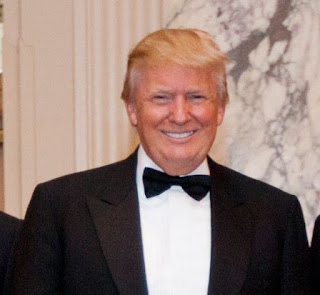 Donald Trump's children Ivanka and Eric Trump won't be able to vote for their father in the New York Republican primary on the 19th because they forgot to register as Republicans. Both previously had stayed independent from any political party which keeps them from voting in a party's primary according to New York's state voting laws. Now I can't really criticize the Trump children, but if my dad was the president front-runner I'd probably do the time to research to make sure I could vote for my father. Though to be honest if my father was spouting racism, xenophobia, and policies that are scarily close to fascism, I'd probably be walking around with a paper bag on my head instead of showing up to the voting booth.
Posted by Adam at 10:09 PM

"Ooops, Dad, we forgot!" Pretty convenient way not to have to vote for the old man, if you ask me!

This "TRUMP man" (is he really human as we know?) is the laughing stock of the World - the Western, Eastern and the land of the Penguins ie: Antarctica!
I am stick to death of reading about him and that equally stupid Texan, Ted Cruz, who is loathed by the Republicans at Capitol Hill, Washington, DC.
Why doesn't the so-called "Grand Old Party" heavyweights pull the plug on the two of them?
If you MUST vote for a Republican throw your weight and vote to Governor John Kasich. He possesses brains and know-how.

I see that the Bronx younger students wouldn't allow Cruz to visit their schools. Good.
Lets's just hope that people who never vote, get off their bloody arses and do so, before walls are erected all around the USA by the rest of the World.
Bernie Sanders should immediately let the US and the World know who is his VP nominee, a younger person with intelligence who knows that Hawaii is a State of the Union,
(poor old John Cains - Tea Party VP selection, that wretched Sarah Palin did not), Alaska once was Tsarist Russian territory, the Mariannas and American Samoa are US overseas territories with elected members to Congress and the list goes on.
At least Hilary has experience in World Affairs.
She looks the obvious for the intelligent at present.
This has got to be the most bizarre election that has ever been "mooted" in the history of the World.
B J Hunnicut of the 4077 who scratches his head in bewilderment - aka Colin

Sorry John.
I forgot the Mc in the surname - John McCain.
The shock of Trump gave me a Hanoi Hilton moment.
Colin

I believe I would do the same as you Adam, put a paper bag over my head.

The Trump campaign should have been on top of this. He's terrible at details and only sees big pictures.

Of himself, obviously!
Colin