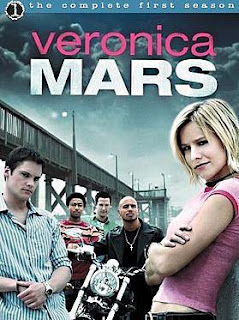 Veronica Mars was a show my wife Daisy and I watched a little on TV back in 2010-2011. I saw a good number of episodes to know the series well enough but not everything in a row. A Veronica Mars movie came out in 2014, and I had wanted to see it. Daisy demanded we re-watch the series again since it had been so long and I had only seen part of it anyway. I couldn't argue with her about it there. This was actually the first major role for Kristen Bell who plays the main character Veronica Mars herself back in the year 2004. 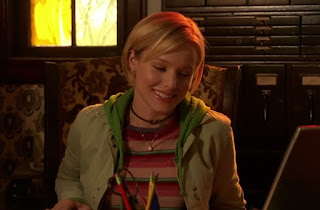 The story begins as Veronica Mars went from one of the cool kids in school to the one of the "losers". Her father is a PI who does detective work for the civilian world. While she's still in high-school, she helps her dad and is very good at her cases. She's also very strong and confident in herself. When others in school try to make her feel awful, she brushes it off and ignores them for the most part. She even goes out of her way to befriend or help some of the other misfits there. But why is Veronica so "out" in the stupid world of Neptune High School? 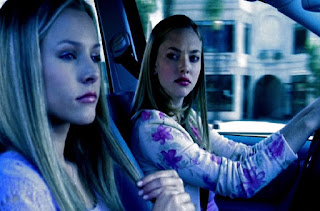 The main reason was the death of her friend Lilly Kane. Veronica had dated her brother, and broke up. Lilly was found murdered shortly afterwards, and her dad was the Sheriff at the time. Her father thought Lilly's father was the main suspect, and when another man confessed to the crime he was voted out of office. The Kanes are the most powerful family in town, and Veronica stood by her father in his worst days and lost her "friends" in the process. But Veronica kept feeling like something was not right. She couldn't believe that the man who confessed was the real guy. With the rest of the world and all logic against her, she's determined to solve the case to bring honor and justice to the memory of her best-friend. 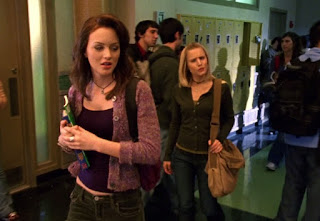 Now that we watched the whole season, I can see why my wife wanted me to see the whole series before we start the movie. I did miss out on quite a bit of the story even from the first season. I think what makes the show so interesting is that Kristen Bell does a really good job portraying her character who's smart, sassy, and quite clever. And who doesn't love a great mystery or two? I usually hate teen-dramas because they're often dumb but I think it does a good job of not sugar-coating the darker side of high school. Veronica has bigger problems than prom-dates and outfit choices. This was also one of the first big roles for Amanda Seyfried who plays a character you never chronologically see alive. She's quite the actress to leave such a lasting impression and I heard that the creators liked her so much that they gave her more story.

Never heard of this show before!

I haven't seen it, but would like to catch up on the series some day.

This one's news to me.

This is one I did watch and liked it. Don't think I've seen all the seasons though. I'll have to watch it again on Netflix.

Haven't even heard of this one...I am so olden and so out of the loop. LOL

It has been on my list of shows to watch for quite some time.