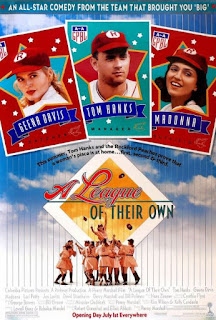 While I was about four when this movie came out, I don't think I ever heard of it until a few months ago. The main reason I wanted to see it was because of Tom Hanks. I had heard of Geena Davis before and knew she looked familiar as she was Barbara Maitland in the classic film Beetlejuice. I didn't even know Madonna was in the film (never really been a fan anyway) until after I got done with the movie. I also played baseball for many years so I usually have a soft spot in my heart for any film where the game is a major part of the plot. 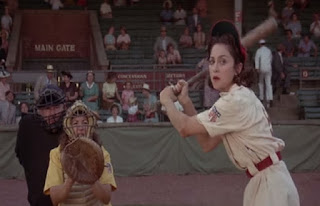 The story takes place during the height of World War II. With most of the young men off to war, there's not many of them to play baseball anymore. So some big wigs in baseball decide that starting a women's league would be a good way to keep baseball relevant while the men were off fighting the Germans, Italians, and the Japanese. A pair of sisters named Dottie Hinson and Kit Keller manage to join the team called the Rockford Peaches. Though Kit was only able to join because scouts wanted Dottie so much and she refused to go without her baby sister. Though Kit is not exactly a bad baseball player either. 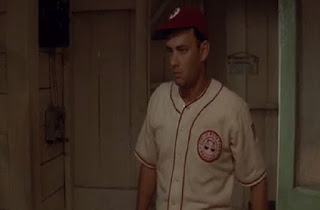 The team's manager/coach is Jimmy Dugan, a former baseball player for the Chicago Cubs. He was once one of the best all-stars in the MLB, but now he's a pathetic drunk. He initially doesn't do anything for the team, except smile and wave for the fans who remember his glory days. Which leaves the girls to figure things out for themselves. While the Rockford Peaches have to worry about defeating the teams they face, their biggest foe is a conservative culture that think women should be in the kitchen, not playing professional baseball. Their first games have only a few people watching, with many there to mock them. It will take a few miracles for the league to stay afloat before the war is over, and even more when it ends. 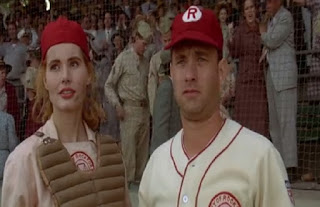 I had sorta figured that A League of Their Own was considered pretty good back in the early 1990's, and I was right. I think I liked it a lot because it showed women struggling for equal treatment in days where misogyny was far more common, and achieving respect. I thought Geena Davis and Tom Hanks made a good team as the star player and the coach who clash often but respect each other in their hearts. While the movie was well-liked, I heard they turned the story into a TV series the next year which somewhat re-told the story again. It was quickly cancelled which I don't find that surprisingly. It's certainly not a movie that ever needed a sequel because the story finished perfectly when it was over.

I loved this movie! I think it was the perfect casting, and thought Madonna and Rosie O'Donnell were pretty funny in it:D I didn't know they turned it into a series...why would they do that?!?!

I remember having a lot of fun at this movie way back in the day! Haven't seen it since then but I'm sure it would hold up well over time, because clearly it was/is a classic.

I really liked this movie!

I think this movie is a classic.
Wasn't it based on a true story?

I saw this one when it first came out and then again last year. A great movie...Tom Hanks being one of my very favorite...Have you seen him in Castaway..? One of his very best and such a great movie...