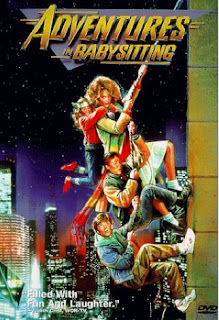 Since the movie came out a year before I was born, I was never was old enough to remember the movie Adventures in Babysitting when it was new. I do recall hearing about the movie a few years ago. Though the title sounds so dumb. It reminds me of books, tv shows, and movies made just for girls. I thought about watching it for years, and finally got around to it. I heard one of the characters was super obsessed with Thor, and not just the Norse god. But the Marvel superhero version of the Norse god Thor who was a founding member of the Avengers.I also wanted to see it because of Elisabeth Shue as she was quite notable in The Karate Kid and the 2nd and 3rd Back to the Future. Though while she's still an actress today, she's not nearly as famous as she used to be. 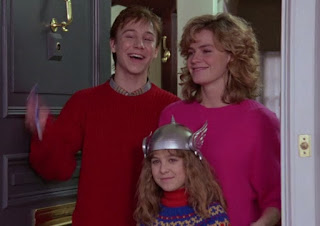 The story begins with Chris Parker, a teenage girl who wants to celebrate her anniversary with her boyfriend. He ends up having to cancel because of a sick sibling. Disappointed she ends up bitterly agreeing to babysit a girl named Sara Anderson who is wacky and loves the Marvel hero Thor. She even wears the helmet of her fictional idol. Her older brother Brad Anderson is there, but he's too young for his parents to trust him to look after his little sister. He has a massive crush on Chris who only sees him as a dumb kid even though she's only a tad older than he is. Sara knows Brad likes Chris, and so does his best friend Daryl Coopersmith who is often too darn obnoxious for his own good.  Daryl decides to sleep over just because he knows Chris is there and wants to play jokes on Brad about it. 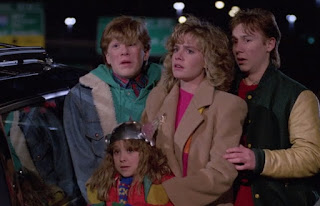 Chris gets a frantic call from her good friend Brenda, who had decided to run away from home. Except she only got as far as the bus station in a scary part of Chicago, Illinois before hitting the harsh reality of her plan. Chris doesn't want to take Sara and Brad out of the suburbs but eventually decides her friend is in trouble and needs the help. On the way there to find Brenda, her car's tire gets a flat. They get help from a strange tow-truck driver who initially scares the life out of them. He agrees to get her to a repair shop to get the car fixed. The rest of the night is filled with unfortunate events that will put all of them to the test. All that is for certain is that this is certainly not a normal night of baby-sitting. Even the mighty god Thor might have trouble saving them, if he was real that is. 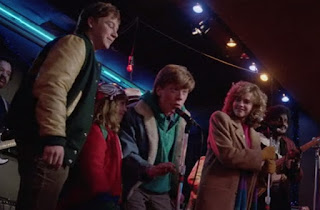 Adventures in Babysitting was perhaps a little worse than I expected. Though I did like the movie as it was quirky, funny, and very creative. I can see why it's retained some notability after almost thirty years. The movie apparently was suppose to have a TV series come out that would be based on its characters and story. It never saw the light of day outside of the pilot. I can see that as a blessing as I don't know how many stories something like that could create. Next month there is suppose to be a remake done by Disney with Sabrina Carpenter and Sofia Carson. However it's really a TV-only movie just for the Disney Channel, and honestly I'm not ever watching that even if it is better than the original.

I liked Elizabeth in Cocktails too. I remember really enjoying this movie back in the 80's. Probably would find it cheesy today.

I must confess that I've never seen this. It comes on TV occasionally so the next time I will record it and just fast forward to the parts with Thor the Mechanic, who I believe was played by Vincent d'Onofrio in his young, slimmer and handsomer days. Also when he had hair.

I love this movie!

A great movie. the only thing that was super stupid was when she went out the window. Like no body in that entire room would see her. Pffft

I saw this a LONG time ago. So long that I don't even remember if I liked it :)

Oh. My. Gosh. I have to see this and the new one!! As a babysitter myself haha.

I wasn't watching many movies back in '87 and never saw this one.