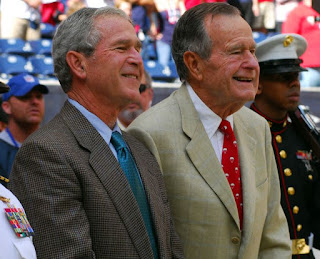 Unless the RNC does something unexpected at the national convention, the Republican Party's nominee will be Donald Trump as he's literally the last man standing. Both former presidents George Bush Sr. and George Bush Jr. will not be giving Donald Trump their love and support. They are apparently endorsing nobody, but it's kind of like endorsing Hillary Clinton or Bernie Sanders when that primary is over. Funny that many in both parties can now finally agree to something and that's Anybody But Trump.
Posted by Adam at 11:29 AM

I have to disagree with the last three words but its all so scary to think about either way. The world is crazy and its about to get even crazier!! Just Vote!
Lisa

I certainly could NEVER envisage Bush Snr. endorsing Trump
and am pleasantly surprised to see "junior of aircraft landing announcements" following suit.
I can't see an established "G.O.P" senator, congressman or governor accepting the VP role from this Trump person. They couldn't stoop that low and God forbid if the contradicted him.
It just has to be either Hilary or Bernie, the World at large WILL NOT accept Trump. It will be a calamity for the USA.
B J Hunnicut aka Colin
PS: Would anyone hazard a guess how many "face lifts" has wife #3 (???) of Trump had?

Now add Bush #3 - "Little Jebbie", and Mick Romney.
The ranks in the G.O.P. are thinning in support.
I wish they would just plain dump this creature of "the Big Mouth, no Brains" Club.

The "SILENCE" of commentators is DEAFENING on this blog subject. ha ha.
B J Hunnicut aka Colin

I'd never say "anybody but Trump" but certainly most people instead of Trump.

Keeping my fingers crossed. I've been appalled so far at how many people voted for Trump. What the heck? Can't they see? Don't they hear?