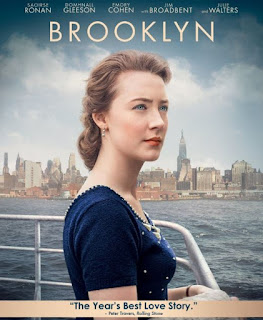 I would say that one of my favorite actresses is Saoirse Ronan from Ireland. I also think it's surprising she's only 22 right now as she never seemed to be immature to me. My wife is also quite fond of her and she has trouble remembering how to say her Irish name. I had heard of Brooklyn sometime last year or perhaps the year before. I thought it was interesting that she was taking a role perfect for her as she's playing a Irish woman who immigrates to America in the 1950's. The movie is also based on a book of the same name by the Irish author Colm Toibin. It got nominated for Best Picture at the Oscars along with Saoirse Ronan being nominated for Best Actress though neither the film nor her got the actual Oscar. 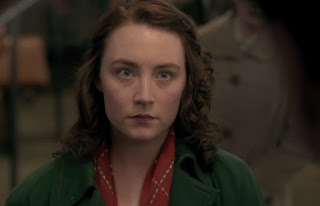 The plot of Brooklyn begins in Ireland where a young girl named Eilis Lacey is set to move to America in the year 1952. In the early 1950's, Ireland is rich compared to nations in Africa and Asia, but their economy has been very depressing for those in Europe. Her sister helps her (along with a priest) get a job and a place to stay in Brooklyn of New York City. Life is much better in New York but Eilis does have a hard time adjusting to her new life. Her new boss thinks she's too sad, but her landlady at the boarding house adores her for being sweet and sensible. But with her sister and mother still in Ireland, she can't help but to feel homesick. Especially when great and bad things happen to her, and the same good and grim things happen to them. She doesn't have many to share these moments with though she does write to them often. 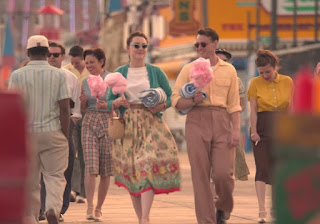 She stays pretty lonely most of the time, and she often stays out of the drama from the other girls at the boarding house. Though day-by-day, she starts to get adjusted to life in America and Brooklyn, New York. She goes to an Irish dance and meets a man named Tony Fiorello. Tony quickly admits that he's not Irish or Irish-America, but rather Italian. The pair agree to date, and for the first real time since leaving Ireland she is really happy. But in the height of her new romance, her past in Ireland will knock on her door. Which will leave her with the difficult choice of going back to Ireland, or staying in America. But regardless of which choice she makes, it will be hard to say if she made the right one. It's difficult to have your heart belong to two countries and two cultures so far away and separated by an ocean. 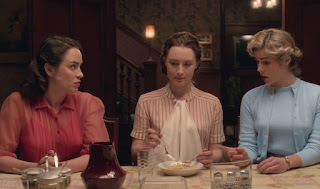 I wasn't doubting I was going to like Brooklyn a lot and I did. While it got the nomination, I can see why it never grabbed that Oscar for real. It's a wonderful film but certainly not one that shatters your perceptions and it has a few dull moments. Being roughly half-Irish myself (genetically) I liked seeing the story of an Irish immigrant and others like her as there's been nobody like that in my family still alive since long before I was born in 1988. Like always Saoirse Ronan is fantastic in her role and I enjoyed her romantic story between her character and the character Tony Fiorello. While she didn't get the Oscar this time, I know sometime in the next ten years we'll see her on-stage at the Academy Awards with one in her hand. That's assuming she'll keep getting roles in a good movies like this instead of those movies that draw crowds but bore critics.

I saw a 20 minute snippet On Demand and thought this looked like a real good movie. Her landlady was a hoot.

I wasn't planning on seeing this movie, but now that you've recommended it, I will.

My husband is very interested in the history of new york and the Irish that landed there just like his grandfather, I am going to tell him about this.

I have never heard of this movie. I just added it to my 'need to watch' list- xo Diana

I am yet to see this, thanks for sharing!

My husband and I watched this movie not too long ago and we really enjoyed it! I'd really recommend it.