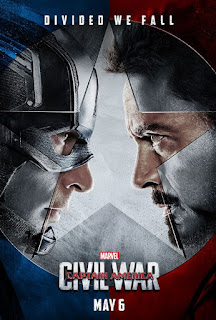 I heard about the 3rd Captain America movie being called Civil War a few years ago and pretty much knew what to expect. It also serves in a sense as the 4th Iron Man movie as Tony Stark is the other major character. This movie is based on the famous comic story-line where super heroes side with either Iron Man or Captain America over the government trying to control super-heroes and in a way their own personal lives. Now let me say that it's certainly not 100% true to the comic as it affected the whole Marvel universe (instead of the few in this universe), and there was a major death in the story-line that would obviously never happen in the Avengers-related movie universe. Spider-Man had a major part in the Civil War of the comics, so I was glad to see them finally get Sony to agree to let Spider-Man enter this universe. So who will win? Team Cap or Team Iron Man? 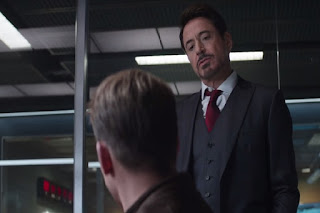 The film begins with Captain America and a team of his Avengers taking down an old foe turned into the super-villain Crossbones. They defeat him but due to the Scarlet Witch's powers, innocent lives were lost when she couldn't save the day in time. This causes an uproar in the international community with the United Nations telling the U.S. government to put a leash on the Avengers team. Iron Man (Tony Stark) agrees along with some of his Avengers pals, while Captain America (Steve Rogers) just can't go along with the plan. If the Avengers are needed in a planet-saving battle, he doesn't want to wait for bureaucrats to give him the green-light to save the day.  Which causes a lot of tension between Tony Stark and Steve Rogers. 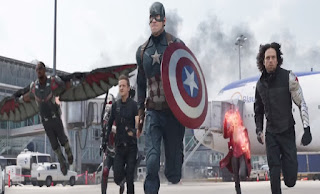 A tragic event occurs which most of the world blames The Winter Solider for even though Captain America was sure he reformed from his evil past. When he tries to save his old pal Bucky Barnes from being captured, and this action puts Captain America in direct conflict with Tony Stark and those who agree with him. The remaining Avengers (except for Thor and Hulk who are absent) all take sides and Iron Man and Captain America go from friends to foes. They fought the evil Loki together, and they stopped Ultron from taking over the world. But now for the first time, the Avengers are at war with each other. Both sides think they are right, but who will prove the other side to be wrong? 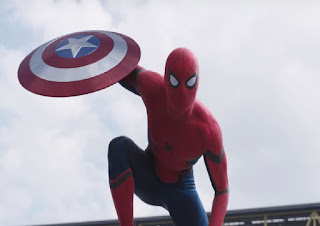 Overall I was pretty happy with Captain America: Civil War. I thought the 2nd Avengers movie wasn't nearly as great as the first and this makes up for it. We're all used to super-heroes vs super-villains but  the concept of their own internal conflict is certainly something you never see every-day. I also liked the new Spider-Man (who is much younger than the other two movie versions) which is good as he's suppose to have his own movie. I was a little shocked to see how very young (and gorgeous) Aunt May (portrayed by Marisa Tomei) is in this universe, but I'm okay with that now. The 3rd Captain America is not the greatest in the series, but certainly one of the best.

I'm dying to see this!

Haven't seen it yet.

I'm waiting for the crowds to thin out a bit before I go to this, but I'm very excited! All the reviews have been great so far.

It sounds interesting! Want to see it.

I'm looking forward to it. I like Captain America because Tony Stark is too sarcastic. lol

I'm on Iron Man's Team whatever his views;)

I cant believe I am not into all the super hero comic stuff. I have super hero shirts and my favorite childhood hero was Batman. I've seen the batman movies but that's about it.
Lisa

PS: I will have to watch Aqua Man when it comes out. I like seeing Jason Momoa.
Lisa

I cant believe I am not into all the super hero comic stuff. I have super hero shirts and my favorite childhood hero was Batman. I've seen the batman movies but that's about it.
Lisa

PS: I will have to watch Aqua Man when it comes out. I like seeing Jason Momoa.
Lisa

Loved it. My favorite part was Black Panther. He's a badass! And his costume is so on point. Winter Soldier will always be my favorite, but I loved Chris Evans in Civil War. He's really morphed well into the "aging" Captain America, carrying the burden of the world on his shoulders along with dealing with his past. Not to mention, I LOVE the Russo Brothers treatment of Black Widow in their films. They really capture who she was in the comic books. xxxooo

I feel so sorry about myself for I havent watched the film yet. My boyfriend was sick when my sister watched it. -_- So I wasn't able to come.

But I've heard that it is good. I was a bit disappointed with the one from DC Comics. I hope it'll really pass my expectation. Hihi

I loved this film, especially the way the conflict between Team Cap and Team Iron Man was handled. They didn't do a great job at DC Comics and I was afraid this one would have disappointed me as well. I also loved the new Spider-Man and Black Panther, can't wait to see their own films.