Fact of the Day: Ninja By Night 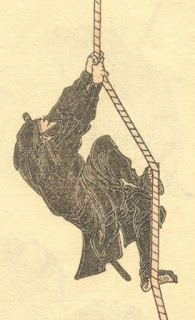 Japan's historic ninjas are famous for their all-black clothing and their notable missions of being assassins in the night. Ninjas often worked during the day as well though without the traditional ninja clothing. They would often wear disguises to make themselves look like monks, ronin (lord-less samurai), merchants, and priests.
Posted by Adam at 12:00 AM

I wish they would make a television series about the ninja days...that would be awesome.

I'd sure never want to mess with them, day or night

I wanted to be ninja when I was kid...well, I still do actually.

If you see a ninja, he's not doing his job properly.

Ninjas - never not cool, even during the day.

I never really even knew what a Ninja was exactly....
and I always just love DEBRA SHE WHO SEEKS comments...she is so funny....