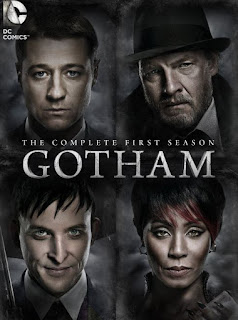 Gotham is rather new, so I'm not that late to the game this time around. Out of a DC's superheroes, Batman is my favorite and Gotham is his city. Before Smallville, they had originally planned to do a series with a much younger Bruce Wayne but that idea morphed to a young Superman instead of a younger Batman. Gotham is basically the same idea, but the hero is not Bruce Wayne/Batman but rather someone else. His name is James Gordon and in the Batman stories he will eventually be Gotham's legendary police commissioner and grand ally to the Dark Knight Batman himself. Bruce Wayne is present, but just as a kid. Can Batman be a great story without... you know Batman? 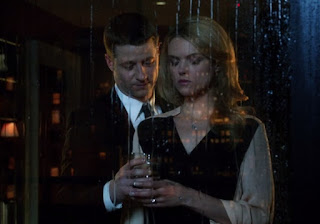 The story begins as James Gordon begins his career as a police detective for the Gotham City Police Department. He learns that Gotham is nearly beyond saving, but remains almost hopelessly optimistic. He learns that the Gotham city government is corrupt including his co-workers and bosses in the GCPD. Mobsters really run the show in Gotham. Jim Gordon might be the only honest man with a badge, but he is determined not to stay quiet or look the other way even if his job or life may be at stake. Something that would be easier if he didn't have someone to care for, his gorgeous fiancee Barbara Kean. 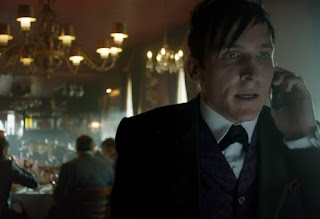 The darker side of Gotham is very complex. Carmine Falcone basically is the most powerful man in the city. Salvatore Maroni is essentially his biggest rival who is mostly peaceful with Falcone, though wishes he could topple him. Both sides have their own people such as Fish Mooney who is Falcone's number one lieutenant but is cunning enough to perhaps take down her leader and take the metaphorical throne herself.  Then there is Oswald Cobblepot who many call "Penguin" who becomes hated and beloved by people from both sides of Gotham's dark elite. And Jim Gordon will have to deal with them all and many more who are just plain crazy or out to accomplish their own evil goals. 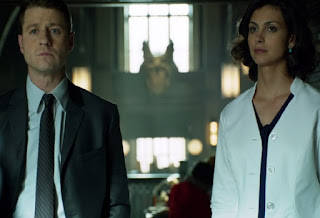 Like Arrow, I think Gotham's main flaw is that they sometimes focus more on quantity than quality. There doesn't exist any team of writers talented enough to make a 20+ episode (all running almost an hour) season exciting enough where there is no filler. Gotham is certainly better than any season of Arrow I've seen so far (and their universe isn't connected) and there were a few twists I never expected. Ben McKenzie is really awesome as Jim Gordon, and Robin Lord Taylor really nails it as the Penguin. I was disappointed to see what they did to the character of Barbara Kean especially as she had a lot of complexity to her. Though I also did like Morena Baccarin as Dr. Leslie Thompkins so I suppose that might balance that out. I do have my criticisms of the show, but I can't see why any Batman fan would not like this one.

I tried watching this show and just couldn't get into it.

I guess I'm burned out on shows about comic book heroes.

Agreeing with Stephen. Too many superheros going around for me to try and catch up on yet another one. Glad you are enjoying it though.