Harry and the Hendersons (1987 Film) Review 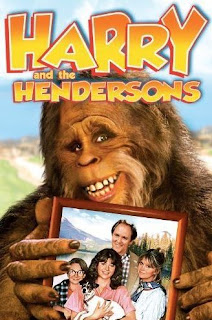 I had heard of Harry and the Hendersons a few years ago mainly because John Lithgow was in it. I loved him in the TV series 3rd Rock From the Sun.so I figured I had to eventually see this one. I wasn't quite sure if this one was going to be good or not. Critics back then seemed to be very mixed on whether the film was good or not. It actually won an Oscar, though it was only for Best Makeup, not for acting or a good story. I also thought that Harry the Bigfoot monster would talk, but that's not what happens. But I think that's a better thing as it would make the story seem more ridiculous than it was. 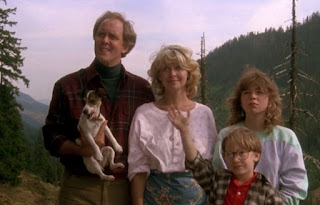 Harry and the Hendersons begins with a family on vacation. They take a trip to the forest and mountains to camp. The trip is almost over and they drive home to Seattle, Washington. But on the way they hit a big animal. Originally thinking it was something like a bear, they take a closer look and realize it was not a bear. But rather a Bigfoot monster, and it looks like he no longer can walk again. Quite unsure what to do, they put Bigfoot on the roof and cover him up. They arrive home to give them some time to think. As many wouldn't believe their Bigfoot story without seeing it for themselves. 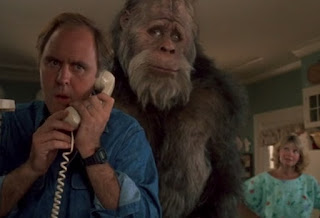 The father George Henderson realizes that the monster is not only alive, but destroying their house on accident. With a lot of damage to their kitchen, they take it rather well. Especially as Bigfoot turns out to be rather gentle and kind to them. The mother Nancy wants Bigfoot to go back to his natural home, her son Ernie wants him as a pet, and her daughter Sarah just wants Bigfoot out of their lives for good. But George starts to bond with the beast, and decides to name him Harry. But they must act fast on what to do with Harry as the Bigfoot can't be kept in their house forever. And he's not safe in pubic with all the hunters wanting to be the first person in history who takes out the legendary monster. 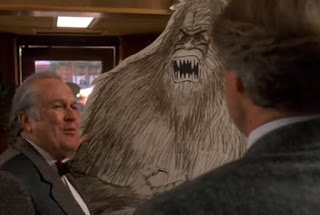 Harry and the Hendersons was about as enjoyable as I expected. I remember being really fascinated by Bigfoot (and the Loch Ness monster and UFOs) when I was younger, but now I don't believe the monster(s) even exists. Though Harry the Bigfoot is quite likable and I liked seeing each family remember react differently to him and his antics. They made a TV series based on the story a few years later which ran for about three years. But I obviously never saw that. I'm sure many people have forgotten about this one almost 30 years later, it's still a decent and cute story about a family adopting a Bigfoot.

Oh yeah, I remember that one!

I kind of remember hearing about it, but never saw it. Sounds interesting though and I guess I can already figure out the ending.

John Lithgow is really a great actor and the story sounds hilarious.

This was my favorite movie when I was like 8. I used to watch it all the time on summer break.