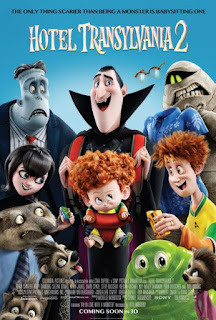 I had seen the original Hotel Transylvania a few years ago and I liked it a good bit more than I expected. Critics weren't very happy with the original but most of them will find any excuse to trash anything associated with Adam Sandler. The 2nd movie did better with critics but not by much. My wife was excited to see the sequel though she was a little disappointed that we missed it in theaters. I liked the concept of this sequel as the original had it sorta set it up that way with Mavis and the human Jonathan eventually having a kid. There's a few Dracula stories of the vampire having a son (like Alucard from the Castlevania video games), but I don't think I've ever seen the legendary vampire himself as a happy grandfather. 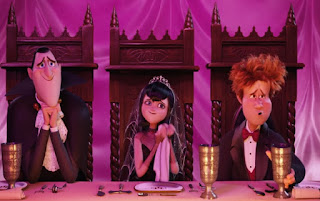 The story begins shortly after the events of the first movie. Mavis and Jonathan have a grand wedding at the monster hotel and have guests from both the monster side and the human side of the world. Humanity finally learned that monsters were real, and nobody really seemed to care that greatly about it. With humans the least of their problems, most of the monsters can live with them in peaceful co-existence. Though there does exist some monsters who won't give up their bigotry of humans. Count Dracula doesn't even have the courage to tell his father Vlad that Mavis had married a human and not a monster. He also figures that the older than time vampire probably won't be too happy about what happens shortly after. 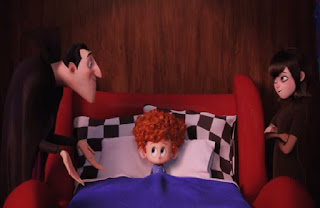 Mavis gives birth to a son named Dennis. Grandpa Dracula loves his grandson with all of his heart, but he does worry about him. Most vampires grow their fangs by their fifth birthday, and little Dennis seems to be far more human than vampire even though his mother is 100% vampire. Dracula decides that he needs to push him a little to get his monster side out. Though Mavis is only concerned with Dennis' happiness. She actually wants him to move out into the human world if it becomes obvious that he will never be a monster. So Dracula gets desperate and uses Mavis' trip to California (Jonathan's old home) as precious time to get his grandson some of his own vampire fangs. But if he fails, then he'll have to take a long trip just to see his family. 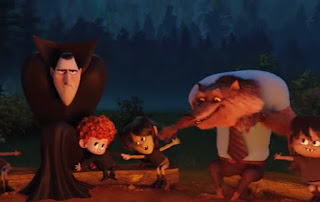 I was surprised but I actually liked the 2nd movie much better than the first. I thought Jonathan was too goofy in the first movie but his role in this sequel is a lot smaller. The majority of the plot is about Count Dracula and his grandson Dennis. While Dennis doesn't look much different from his dad (despite the obvious difference of their age) I liked him a lot. The comedy in the movie could be a little better but I enjoyed the story far-more anyway. The ending I thought was not only adequate, but one of the best endings I've seen in an animated movie. Fans of the original movie will not be disappointed with this one.

I saw the first one and thought it was cute. I haven't seen this one yet.

Ah, this movie is so nice!

I haven't seen the first one yet but my brother saw both and said they were cute. Maybe I should give them a try.

Only saw the first. Maybe I'll catch this one closer to Halloween.